Family Games: 2 Sequels that Make the Original Games Even Better

Expansions with games are a lot like sequels with movies. You see some familiar faces...the premise is a little weaker than the first...and you wonder why did they make this solely to cash in on the popularity of the first one? Fortunately for you, I have scoured the game world for you to find you two sequels that not only live up to the hype, but make the original games that much better. They are Valeria Card Kingdoms: Flames and Frost and The Grizzled: At Your Orders. 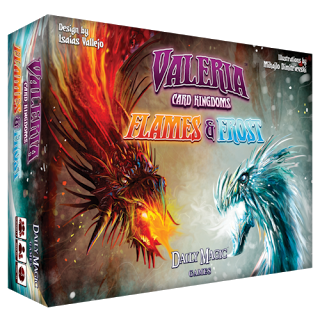 Welcome to the Kingdom of Valeria! It used to be a quiet area with a noble king and many loyal dukes. However, the king has grown weak in his old age and monsters started showing up and taking over! It is now up to you and your fellow Dukes to save the Kingdom of Valeria. The Duke who is most successful at recruiting citizens to defeat these monsters and building domains to fortify Valeria will claim the throne. This is Valeria Card Kingdoms! Valeria Card Kingdoms was one of the IT games on Kickstarter in 2015. Since their success with this game, they have had two sequels (Villages of Valeria and Quests of Valeria). and have recently launched an expansion on Kickstarter called Flames and Frost. Today, I am going to tell you about both the base game and the expansion, and tell you how the expansion improves the base game. Let's start with the stats though. The game plays 1-5 players, ages 13+, though I'd say 10+. It takes 30-45 minutes to play, depending on how many players you have. You can get the base game, Flames and Frost, mini-booster/expansion packs for a pledge of $79 ($88 after shipping) or if you already have the base game, the expansion will cost you $24 ($28 after shipping).

Valeria Card Kingdoms (VCK) is already a great game. For starters, the art is fantastic. The Mico has a very distinct and recognizable illustration style, and I am glad that two of my favorite game series use his art. Secondly, the game play is engaging with little down time for any player. Lastly, the game is just plain fun! If there were no other content ever added to this game, it would be a solid 9 out of 10, and be a game that I would play as often as I could. However, the expansion, Flames and Frost (VCK:FF), and other added booster packs crank this game to an 11! How you ask? Two things - Replay Value and Choice.

The Replay Value was already pretty high for VCK with the amount of Dukes, Citizens, Monsters, and Domains. VCK:FF adds five new Dukes, eight new Citizen stacks, five new Monster areas, and fifteen new domains for an exponentially larger amount of replay. There is also a new booster pack, which add Agents to the game. Two big knocks against the base game is that you accumulated more Resources than you could ever use and there wasn't enough player interaction. Agents give you the ability to convert Resources to Victory Points or to hit your opponent with a "take that" action. Problems fixed!

As for the concept of Choice, the new cards introduce Wild resources (where you choose what you need and aren't handcuffed into a resource you have more than enough of) and the option of taking Victory Points as a reward, in lieu of Resources. This presents the interesting decision of do I take the Points now or get more Resources to build a stronger tableau and eventually get the points then? You'll have to figure out that balance for yourself. I really am loving this new expansion, and I can't imagine ever playing the game without it. Be sure to check out the current Kickstarter campaign if this sounds like a game your family would love! 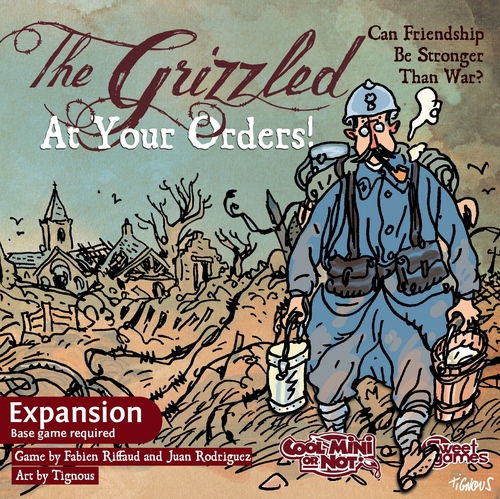 The Grizzled: At Your Orders

It is April 4, 1916, and the war is still waging. Each day brings new difficulties and new hardships. However, you and your band of friends are still persevering. There seems to be something occurring that is different than the past two years. The higher ups keep sending you on missions, some more challenging than others. This is The Grizzled: At Your Orders. The Grizzled: At Your Orders is the much anticipated expansion to The Grizzled. It is designed for 3-5 players (with 1 and 2-player variants), ages 14+. It retails for $14.99 and takes approximately 30 minutes to play. Read about setup and game play in my previous review.

The first thing I noticed in the box was cardboard cutouts of every character. I like this, because it adds more theme and makes you feel like an actual soldier and not just a card. It also serves to remind your fellow soldiers when you are in a mission and when you are out.

The biggest changes are the Missions cards. There are 40 Missions cards in the box. (13 easy, 13, medium, 13 hard, and 1 Final Assault/Last Stand) Before the game, you decide your difficulty level and seed the Missions deck. The active player then draws two Missions cards, picks one, and puts the other back on the top of the deck. These cards tell you how many Trials cards each player gets, a bonus or a penalty for this mission, and how to get rid of the Mission card. I really like these Missions, because it gives you ways to tone down or amp up the difficulty. The Final Assault/Last Stand card really drips with theme, as its an optional final turn to end it all. You either win, lose, or win but die in the process.

Other nice, little changes in the game are as follows:

1. Speeches don't go away once used.

2. Support tokens always give you your Good Luck Charm back and can remove Hard Knocks.

3. The first player may perform a Strategic Withdrawal which lets him take one card from his hand and put it on top of the Trials pile.

Apart from a few things in the rule book that could have been clearer, I am finding very little to complain about with this expansion. It adds new mechanics and a little more immersive theme. There's also just enough tweaks to the rules to make a very good game even better. Lastly, you can fit both game sets into one box, so you don't have to carry around both boxes. I can't imagine teaching or playing The Grizzled without this expansion.