They say that love is the universal language, and while that is all well and good, if we're being honest with ourselves, it's actually food. Food is more than just sustenance to people. It's passion, creativity, history, memories, and culture all rolled up in one. It's why people go out for dinner on first dates. It's why holidays revolve around the kitchen and the table. It's why so many people start restaurants, even if it's one of the least successful ventures out there. Recognizing people's love of food, Daily Magic Games took a popular game (Glory to Rome), re-themed it, and improved it to gives us Food Truck Champion, a game for 2 to 5 players, ages 8+. It takes approximately 60 minutes to play and you can own the game for a pledge of $24 on Kickstarter. 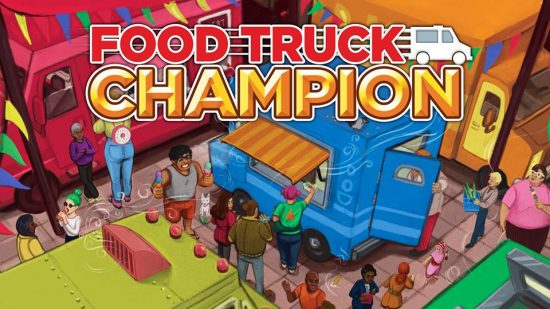 We are all familiar with games that have multi-purpose cards, the most famous being Glory to Rome. Food Truck Champion takes this mechanic, and gives it a different flavor that more people can relate to...food! Couple the theme with the art of Claire Donaldson (of the Go Nuts for Donuts fame) and you have a meaty game that is sure to have everyone coming back for seconds! I really like how each player's truck has its own personality and cooking style. The names are clever too...Sol Sisters and Herban Garden are both very punny and reflective of their signature dishes. Some examples of the food include classic fries, grandma's apple pie, sticky rice cakes, and pickled beet salad. The game requires a great deal concentration to play due to the timing involved in playing this game. You may think you have the perfect action, but since people have the ability to follow your action, they might end up having a better turn than you did. Sometimes your concentration is broken though, because these cards make you so hungry! If this sounds like a fun game to you, I highly encourage you to back it on Kickstarter. You won't be disappointed! 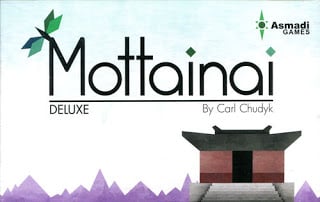 Carl Chudyk is a game designer who created one of the most popular games of all time - Glory to Rome. This game popularized the mechanic of cards with multiple uses. Unfortunately, the game is out of print and very expensive to obtain currently. Luckily, Mr. Chudyk developed another game called Mottainai. Mottainai means "Don't waste," or "Every little thing has a soul." The game is considered to be the "spiritual successor" to Glory to Rome in that it too uses the mechanic of multi-use cards. The game plays 2 to 5 players, age 13+. It  is available on Amazon for $18 and takes approximately 30 minutes to play.

Mottainai is a game of subtle brilliance, so subtle in fact, that I would argue that you won't notice how brilliant the game is until multiple times playing through it. The first time you play it, it will take you a bit longer than normal to play the game, because you are trying to understand the rules and best explain them to others. I like that the game is quick and plays up to five players, because I generally play with five total and it's not always easy to find a game to accommodate that amount. The fact that it is quick means that we could play it several times in one night to get a better feel for it. I unfortunately have never had the opportunity to play Glory to Rome, so I can't make a head-to-head comparison, but maybe one day.

What I really like in the game is the the replay value, because I don't want to just have a game played once and then collect dust on my shelf. With the cards being multi-use, you will see different ones at different times and use them in different ways depending on the situation and stage of the game. Therefore, each game you adapt your strategy to maximize your turns and points. The only thing I don't like about this game is the theme. I can get into a lot of themes (zombies and Cthulhu excluded), but playing as a Buddhist monk was a bit strange to me. Other than that, it is a solid game and one that has an expansion coming out this year, so if you like this game, be on the lookout for Mottainai: Wutai Mountain.