Europe is up for grabs and you are vying for control of this continent in the 17th Century. In order to do so, you must place Nobles in key cities of four countries. Royals is a game for 2 to 5 players, age 10+. It takes approximately one hour to play and retails for $50.

At its heart, Royals is an area control game with elements of hand management. The core mechanic of the game involves drawing cards from two separate decks of cards. Some of the cards will be visible to you providing you more information on what is available, but if they aren't of use to you, you are left drawing blind. This is very much like the popular Ticket to Ride game. Unlike Ticket to Ride, where you have specific, secret goals that may overlap with others, you all have the same goals in Royals. You also want to accomplish them first, as the points quickly decrease and disappear.

Another interesting decision you will have to make is what country you want to focus on. Sure, you might be forced towards one country, if you keep drawing their cards, but you'll have to decide whether you want to pursue a country that provides the most points each period for first place but the fewest each period for second place, or let others fight over that country and you focus on different countries that are slightly less valuable. 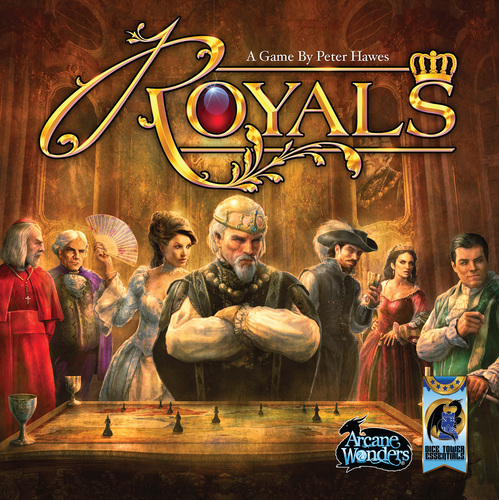 I'm usually not one for area control games as I primarily play games with my wife, and two-player area control games don't have the conflict and tension you need, unless you're both very cutthroat. However, I found myself enjoying this one quite a lot. In addition to fun game play, it was also very simple to teach, because the mechanics were familiar. I felt the theme of nobles and royalty was perfect for an area control game, and I enjoyed the artwork and the components were of good quality. I really thought the puzzle piece Title markers were ingenious and hope more games that have a lot of ties in them find a way to incorporate the concept. This is the third game from Arcane Wonders Dice Tower Essentials Line, and I think they picked a winner as I would definitely agree that its a game you should have in your collection. 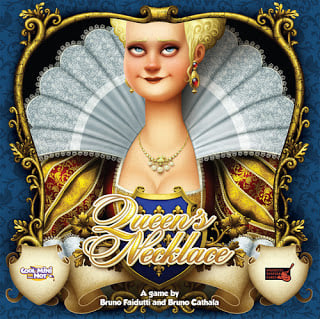 Queen's Necklace is a game that was released in 2003 by Bruno Cathala and Bruno Faidutti. It has since been re-released with updated artwork by CMON Games. The game takes place in Paris around the time of the French Revolution. You and your opponents are royal jewelers trying to craft and sell the best jewelry to the Queen and her court. The game plays 2 to 4 players, ages 14+. It takes approximately 45 minutes to play and retails for $30.

Queen's Necklace is an economic and hand management game that is disguised as a jewelry making game. Within this game, you are carefully deciding which cards to buy and in effect which cards your opponents will get to buy at a discount. Since there are only three times to score points the entire game, you want to try and keep up with what jewels your opponent is buying, so you don't waste a scoring phase thinking you are going to score for a specific jewel, only for your opponent to score and you walk away with nothing.

The game has been around for over a decade, and it is a solid game in terms of mechanics, but it was in desperate need of updated artwork. This is exactly what CMON Games did, and I'm a bit torn on the artwork. It is a definite improvement over the previous artwork, but I can't decide if I like the cartoony nature of it or not. As for the player count, I found it played best with three players. At two players, there wasn't enough tension. It felt like, "Well, if you take those two gems, I'll take the other two gems." At four players, it was a bit of chaos on what ended up happening during the jewel sales, and it felt like planning didn't matter at all.

Overall, the game is pretty fun and plays at a pretty good pace. Since you have the same amount of money each turn, it's generally an easy enough decision on which cards you are going to purchase. The biggest decisions come from which cards you want to play and at what time. I really like the period this game takes place in and it fits the theme well. Generally, I'm not a fan of economic games. because sometimes you make all these plans, thinking you are doing well, but then it blows up in your face. This game has that element, but it is light enough, plays quickly, and scores easily, so you won't mind too much if you lose.