Ignatius Press has printed some of the most informative and visually stunning Catholics books in recent years. Each of the books are the work of Grzegorz Gorny, a reporter, essayist, and film/television producer, and they focus on a particular devotion or mystery of the Church. Witnesses to Mystery investigates the Relics of Christ. Three Kings, Ten Mysteries examines the secrets of Christmas and Epiphany. And then, there are the volumes which examine different Marian Apparitions - Guadalupe Mysteries, Trust (focusing on Divine Mercy), and the most recent one, Fatima Mysteries, which was released just in time for the 100th anniversary of the Marian apparition to the little shepherds at Fatima. 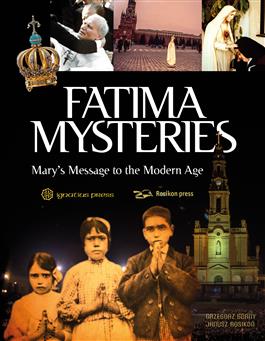 I would like to tell you a little bit about that book today. The book is divided into the following chapters:

1. Pope on the Brink of Death

2. The Angel of Portugal

3. Miracle of the Sun

5. Russia's Errors Spread Throughout the World

9. The March of Communism

10. Neither Anathema nor Condemnation

11. Polish Pope Throws Down the Gauntlet

13. Fall of the Evil Empire

The book surprisingly doesn't begin with the apparition of Mary in 1917, but instead with the assassination attempt on Pope John Paul II. The reason for this is because the Pope was mentioned in the Fatima message ten times. In this chapter, we have a graphic and detailed description of Pope John Paul's near-death experience. Chapter two flashes back to the assassination of Archduke Franz Ferdinand in 1914. This creates an interesting juxtaposition between the first two chapters. This assassination was one of the leading causal factors of World War I, and the chapter details some of the effects of this war. The chapter also introduces us to the three shepherd children (Lucia, Francisco, and Jacinta) and the nation of Portugal as a whole. The third chapter is by far the most interesting, as it revolved around what the children saw and what Mary told them. It also talked about Lucia's mission to spread the devotion of Mary's Immaculate Heart and consecrating Russia.

The bulk of the book then goes on to discuss all the evils that plagued the world afterwards, including the Communism in Russia that resulted in martyrs for the Eastern Orthodox faith and the Second World War. Eventually, the Soviet Union fell and the book chronicles that as well. The book, of course, ends with the much speculated and over-dramatized Third Secret of Fatima. Pope John Paul II didn't see this secret as something that pointed to the end of the world. He, instead, connected this secret to his own life and the attempt made on it. He also saw it as potential new dangers that could affect the world, but not new as in never-seen,  but new as in not seen in awhile but stemming from the same old sources.

The amount of photographs, maps, etc in this book is astounding and complement Gorny's level of investigative journalism perfectly. Gorny has once again given us a top-notch book on a crucial part of our Catholic faith. He does a masterful job of not only educating us on Fatima and the little shepherds, but he also places the apparition in its proper context, so that the reader can better understand and appreciate this miracle. He also shows us that there is still work to be done regarding Consecration to Mary's Immaculate Heart, and that just because Communism was defeated, it doesn't mean the problem was instantly solved. I highly recommend this book and the others I mentioned earlier in this review. Place them on your coffee table, so that they will always be at your fingertips, and when you have guests they will perhaps thumb through them and be drawn into the Catholic faith.