A Look into 'The World of Marian Apparitions'

Andrea Bear explores the book The World of Marian Apparitions: Mary’s Appearances from Fatima to Today, by author Wincenty Laszewski.

Have you ever wondered why some Catholics are so enthralled with the appearances of Mary? Why does Mary appear to people? How do we know it’s authentic and What does Mary want? The book The World of Marian Apparitions: Mary’s Appearances from Fatima to Today by author Wincenty Laszewski dives into these questions.

It pleased God, in his goodness and wisdom, to reveal himself and to make known the mystery of his will. His will was that men should have access to the Father, through Christ, the Word made flesh, in the Holy Spirit, and thus become sharers in the divine nature. (Cathechism of the Catholic Church 51)

Revelations (messages from God) have always played a significant role in the Christian faith. Throughout history, God continues to reveal Himself in a variety of vehicles including prophets, saints, visions, dreams, as well as personal prayer. But there has always been the matter of public vs. private revelation. Public revelation is understood through the messages of the patriarchs and prophets (Old Testament) to Jesus public ministry and ending in the death of the last apostle (New Testament) which became the foundation of the early Church.

Yet private revelation has always been up for debate, as it too shares in the divine encounter. Private revelation is more individualized: it can be expressed in anything from locutions (inner voices), weeping or changing statues, miracles, or appearances from angels, Jesus, the saints and/or the Blessed Mother. Private revelation, however, is not essential for our deposit of faith. Still the Catholic Church does not deny that these can have a profound effect on one’s belief. 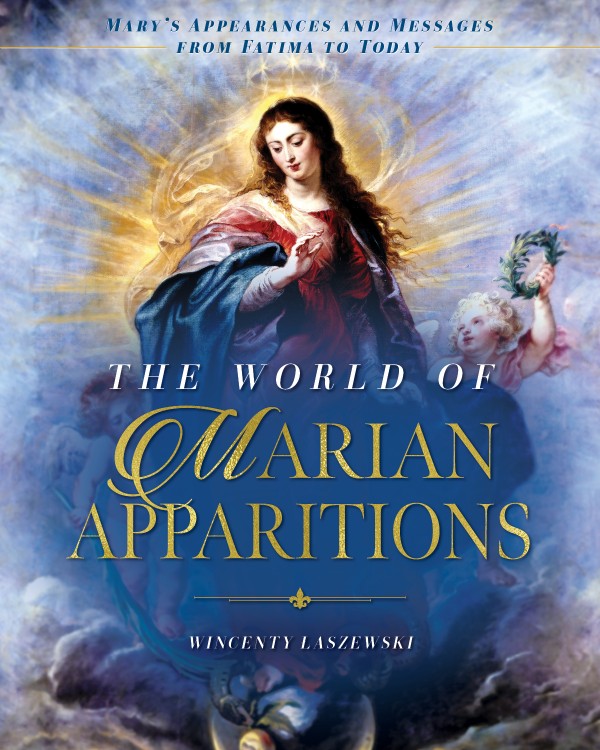 Private revelation has continued throughout the ages, yet surprisingly the twentieth and twenty-first centuries have given way to a surge of apparitions, particularly from our Blessed Mother Mary. In the book The World of Marian Apparitions: Mary’s Appearances from Fatima to Today, author Wincenty Laszewski shares reported appearances of our Lady from all over the world. Laszewski points out that Marian apparitions generally include four components: the visionary, the experience, the message, and the miracles, but within this framework there is a wide variety. The book is very clear to acknowledge that not all apparitions are the same and that the Catholic Church is very particular on what it considers an authentic apparition, often using outside experts before giving any apparition official recognition.

As the title suggests, the book looks at the twentieth and twenty-first centuries and delves into apparitions including the more commonly known 1917 events in Fatima, Portugal, where Our Lady appeared to three shepherd children predicting the coming of World War II and the spread of Communism. Also discussed are the lesser-known apparitions, such as the experiences of mystic Elizabeth Kindlemann of Hungary, who in 1964 received special additions to the Rosary from Our Lady as a way to blind Satan.

The book provides a legend with apparitions listed by date, region, and description along with distinctions of approval by either the Vatican or local bishops, or designations that the apparitions are unconfirmed as supernatural. There is also a timeline showing highest frequency within years. In 1954 alone, there were more than 30 reported apparitions in various parts of the world.

All apparitions in the book include Our Lady, but as mentioned earlier are not all the same. In Warraq, Egypt, for instance, only Mary’s silhouette appeared on the roof of a church with thousands of witnesses of multiple faiths, whereas Sr. Agnes Sasagawa of Akita, Japan (in visions approved by the Church) has had direct visitations by the Blessed Mother and a wooden statue of Mary that oozed teardrops. Ultimately most of the apparitions in the book center around the messages of repentance, fasting, communion, and a stronger call to prayer.

This book provides excellent coverage and a definite starting point for more inquiry of the many apparitions over the last two centuries. While the question remains of why Catholics are so enthralled with Marian apparitions, there is no doubt reading this book will trigger even the most skeptic reader to search further. For more information about this book, visit Sophia Institute Press.

A great sign appeared in the sky, a woman clothed with the sun, with the moon under her feet, and on her head a crown of twelve stars. (Revelation 12:1)

"It's through prayer and penance that our salvation lies"
Read
Advent with Mary: Mary's Calm-Wonder
Read
Byz-y Mama: Humility and Conception (with a Quick Reading Recommendation at the End)
Read