Colditz Castle is a Renaissance castle in the town of Colditz, Germany. After World War II began, the castle was converted into a POW camp for officers who had become security risks or were dangerous. Despite it being considered an impossible to escape prison, it had a high amount of successful escapes. Major Pat Reid was one of the POWs to escape Colditz Castle. He designed a board game with screenwriter Brian Degas called Escape from Colditz. Osprey Games gave the game an update to commemorate the 75th Anniversary. It plays 2-6 players, ages 12+. Play time is variable in length depending on number of players, and it retails for $65. 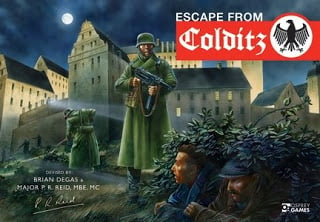 For the most part, Escape from Colditz is a simple dice-rolling, point allocation system. It is a classic game in this sense, and it shows in some of the mechanics, like being rewarded for rolling doubles. Osprey Games is aware of this though, and let's you know they are aware. They have enough great games in their catalog that they could have easily updated the game's rules and mechanics to bring it more in line with modern gaming, but they felt it would be doing a disservice to the game and its designers, who were so closely tied to this game and the history which it represents. I applaud them for this decision.

As for the art and components, when you first open the box, you feel a bit immersed in theme. The boxes inside which hold the cards and other components feel like you are opening a kit from World War II. Yes, the player pieces are pawns, which most people look down upon, but meeples were not needed for a game like this and would distract I believe. I really liked the way the board looked too. Yes, it is a lot of individual spaces to move and absorb on initial glance, however, the color scheme has a very intuitive feel to it.

The game can play a little long (a couple of hours), but I really enjoyed the one-versus-many nature of it. Yes, it can be tough mentally/emotionally to play the German Security Officer, if you immerse yourself in the theme, but it is still a rewarding experience. What I really like about the game is the decisions you have to make. For example, if you have one POW close to escaping, but could be caught, you can move another of your POWs to intercept a guard, be caught, and let the other one escape. To some it might be a matter of moving pawns, but again, if you immerse yourself in the theme, it is a beautiful sacrifice that a person made for the betterment of another.

Overall, I enjoyed the experience this game provided. If I had to compare it to anything, it would be The Grizzled. It provides a tense experience that leaves you feeling drained after playing it, but in a good way. You feel like you have all the time in the world when you start with 50 rounds, but as it counts down, you get to 40 and then 30, and then 20. Suddenly, your pulses is racing and your stress level goes through the roof! This is how a game should make you feel! With that said, it is not a game I would want to play multiple times in a row, or maybe more than once a month, just because I feel like it would lessen the experience and make it more playing a game and maximizing your chances of winning, not experiencing the emotional and visceral response. However, I feel like this is a game that everyone should play at least once, and I firmly believe it belongs in every high school history classroom in the country.

[tweet "Two games for tweens and up from @OspreyBooks; review by @StuartsStudy"] 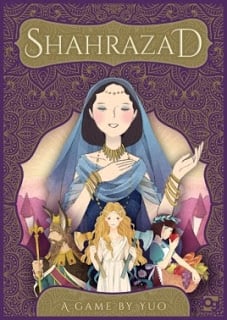 In 1,001 Arabian Nights, Shahryar (the king) was married to a woman he loved. He found out that she cheated on him and had her killed. Because of her unfaithfulness, he vowed to never experience this again and marry (and kill) a new woman every day. After doing this for 1,000 nights he was introduced to Shahrazad. Each night, she would tell him a story, but not finish the story, so that he would keep her alive another night to finish the story and start another one. This went on for 1,001 nights until she was out of stories and he had fallen in love with her. Osprey Games visits this theme in the game Shahrazad. Shahrazad is a game for 1-2 players, ages 8+. It takes about 10 minutes to play and retails for $20.

Shahrazad is a fun little tile-laying game set in the universe of 1,001 Arabian Nights . . . to a degree. You take on the role of Shahrazad in that you are trying to tell a coherent tale, but the actual tiles are not tales from 1,001 Arabian Nights, I believe. Instead, you see Pinocchio, Beauty and the Beast, and Rapunzel, just to name a few, so that seemed a bit off to me. The component quality is high and the artwork is evocative. The game says it plays one to two players, but I would consider it best as a solo game, and then I would consider it more puzzle than game. It is fun trying to beat your previous best scores and see how good of a story you can actually tell.

These games were provided to me for free by Osprey Games in exchange for honest reviews.