When I was in the process of converting to Catholicism, the biggest hangup I had was Mary. I don't know why honestly, and looking back on it, it was so stupid of me. Mary is Jesus' mother! He loved her with all His heart; why shouldn't we? It's not worship or idolatry to honor her. One of my favorite Cardinals, Francis Cardinal Arinze, recently wrote a book called Marian Veneration. I'd like to tell you about it. 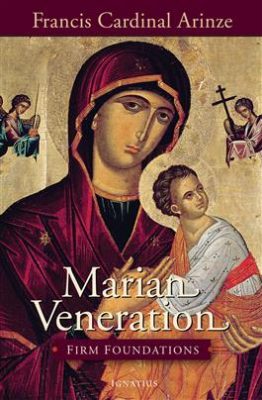 The book begins with a chapter explaining two key terms - veneration and devotion. We then see Mary in Scripture in key events like the Annunciation, Visitation, Wedding Feast at Cana, and other mysteries of the Rosary. The next two chapters address her motherhood, both of God (Theotokos) and of the Church. We also have chapters, which show her place in salvation history and the Liturgy. Lastly, we see saints that had great devotion to Mary, different Marian apparitions, and various Marian societies.

The book is approximately 120 pages in length, making it the perfect introduction to Mary for Catholics and non-Catholics alike. The book relies heavily on Scripture, Tradition, and history. We see references to Church Councils throughout history, as well as works from great Catholic authors. This is a book that I wish had been around 15 years ago when I was in the process of my conversion. It would have crystallized things in my mind much more quickly, and I (hopefully) wouldn't have been as stubborn and ignorant on Christ's mother. If you know someone who struggles with Mary and her role in not only the Church, but each individual's life, I strongly recommend you get them a copy of this book!

Hilaire Belloc was a Catholic, and is considered one of the most prolific writers in England during the 20th Century. He collaborated with G.K. Chesterton a fair bit, and one of his most well-known books is Cautionary Tales for Children, which are basically stories to scare your kids straight. As awesomely horrible as those stories are, today I'd like to tell you about one of his historical works - Characters of the Reformation.

The first person we encounter is King Henry VIII. Belloc describes how Henry sought an annulment from Catherine in order to marry Anne Boleyn. However, the annulment was not granted and sycophants encouraged him to go through with the marriage anyhow. Belloc speculates (probably correctly) that if King Henry VIII would have not followed his passions, then the Reformation would have died out in England first, followed quickly by the rest of Europe. Belloc then dedicates individual chapters to each of the two women just mentioned. Catherine was most likely abandoned due to her lack of ability to produce a son, and Anne, unattractive as she was, had the ability to get men to be at her beck and call. The next two chapters contrast the two Thomases - Cromwell and More. The former was a flatterer to the King and made him a "pope" in England. The latter tried to serve as an absolute moral compass, but was not listened to, sadly. We also see the figures Pope Clement VII, Mary Tudor, Queen Elizabeth I, Descartes, and Pascal to name a few.

Each chapter in this book is more fascinating than the next. In addition, to getting a portrait of each of these important historical figures, we get an understanding of the part they played in the Reformation. What I like best about this book is that he looks at figures from both sides of the event, Catholic and Protestant. Now, granted, he has a strong Catholic bias, but that is to be expected, and if you know it going into it, you can read the book through that lens. He also omits/ignores the Eastern Orthodox Churches, when saying that if the Reformation had not occurred, there would only be the Catholic Church. Those weaknesses aside, I thoroughly enjoyed this book as it was not a dry presentation of dates and facts, but made the time come alive. If you would like to know more about the Reformation, I highly recommend this book! 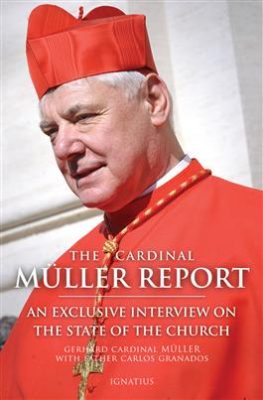 The book is the transcript of an interview of sorts between Gerhard Cardinal Müller and Fr. Carlos Granados. It begins with a section titled "A Report on Hope." In this section, the doctrine of Christian hope is defined and questioned. Some questions presented are:

At the time this book was published, Cardinal Müller was the head of the Congregation for the Doctrine of Faith. This was the same title that Cardinal Ratzinger had when his report was published. This is not only a high-ranking office within the Vatican, but it is also one that gives the head a view on the state of the Church that others do not have. His appointment in this position has not been renewed, but this was merely a matter of Pope Francis trying to limit terms, and not the great scandal that people are making it out to be.

As for the book itself, I found this to be a refreshing read. In this book, we see Cardinal Müller's love for Christ and His Church. What I liked best about this book was the lens of hope through which everything was examined. Generally when you read a book of this nature, issues are looked at from a perspective of faith. This one uses hope instead, and I found this to be an appropriate and suitable perspective given the current attitude in this day and age. I highly recommend this book and am actually interested in Ratzinger's book now to see how things have changed in 30 years.

These books were provided to me for free by Ignatius Press in exchange for honest reviews.