When I was in college, I pursued a degree in Psychology. During that time, I worked for a professor who was studying the Stroop Effect. The Stroop Effect, in a nutshell, measures the reaction time due to interference of a task. That task is usually associated with the names of colors and the color of text in those names. For example, if the word "red" is written in red font, it is easy for your brain to recognize the word "red." However, if the word "red" is written in yellow, your brain wants to think "yellow" instead of "red." Grand Gamers Guild took this frustrating psychological test and made it into a game, appropriately named Stroop! Stroop is a game for 2 to 4 players. It takes approximately 15 minutes to play and retails for $18. 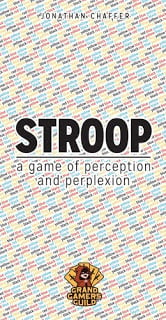 This game (even though it wasn't) seems like it was tailor-made for me to play and review. I tested scores of students on the Stroop Effect in college using a program that my professor developed. I even took the test numerous times as well, just to pass the time some days. Not to brag, but I got so good at it that I could almost beat it. Therefore, when I heard that this game was coming out, I wanted to try it, and the game did not disappoint.

For starters, it is quick to play, making it a perfect filler or game for families and new gamers. Secondly, the mechanic seems familiar to casual gamers, as it feels a bit like UNO or Skip-Bo. Third, there are two modes of game play to accommodate different levels of players. The basic version focuses mainly on color, number of letters, font size, and solid or hollow font. The advanced version adds font direction (forward or backward) to make your brain burn a little bit more when playing and adding just enough more difficulty to the the game. The last and best thing I love about this game is the scientific nature of it. The first round is like a control round. Players familiarize themselves with the game play and the basic concept of the Stroop Effect. The second round really puts your wits to the test, as you are trying to describe the card, while trying not to get tripped up due to the ease of the first round. Highly recommended for casual and experienced gamers alike! 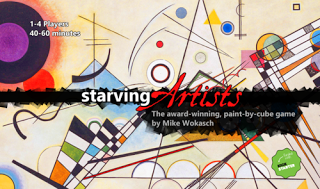 I do not have a single creative bone in my body. That includes anything musical or artistic. That's not to say that I don't appreciate both, and don't enjoy going to the symphony or museum. I just know my creative limits, and they basically stop at paint-by-number. When I heard about the game Starving Artists (self-described as paint-by-cube), I knew I wanted to play this game. Starving Artists is a game for 1 to 4 players, ages 12+. It takes between 30 and 60 minutes to play and retails for $30. (Note: You can also add on a game mat for $15, which appropriately has an image of Johnannes Vermeer's work The Art of Painting.)

Starving Artists is a game that is creatively simple and simply creative. The concept of taking cubes and placing them on famous artwork to complete the painting is genius and makes you wonder why no one thought of it before. Don't let the simplicity fool you. There is strategy to this game, as it's a juggling act between picking the right Canvas, acquiring the right blend of Paint Cubes, and not starving. I admit that I went hungry and lost the first time I tried playing this. Players turns can create a little downtime, but that is true with a lot of games. The only complaint I heard with the numerous people I played with is that it's a shame that it only plays four. Designer, Mike Wokasch, thought of that and created a kit you could buy that would give you the ability to play with up to six players. I am going to have to invest in this, as I regularly play more than four!

The components in this game are well thought out and produced. For starters, the paintings are very vibrant and high resolution. If it wasn't for the squares to place your cubes, you'd swear you were staring at miniature re-creations of them. The cubes themselves are translucent, which was a brilliant decision. I imagine wooden cubes would have been much more economical to produce, but the plastic translucent ones really add that extra aesthetics to the game. I normally don't buy extra game boards, but this neoprene one is a worthy investment as it serves as both a rule reminder and statement piece for the game.

With over 90 unique canvas cards, the replay value is strong in this game. You won't paint all the same canvases from game to game, and you probably won't see them all either without a couple of plays through the game. With that said, I hope to see the designer continue adding to this game, perhaps through little booster packs, but I don't know how economical it would be. My thoughts were to pick popular artists (Van Gogh, Rembrant, Picasso, etc.) and make perhaps 10-card booster packs of them. (Yes, I know these artists already have several representations of their artwork in this game). However, if you released popular artist booster packs, you could add even more theme to the game. Let people have their own deck to draw from, and the first one to paint the required number of paintings (based on player count) wins.

What I liked best about this game was the hidden educational/cultural value. When I was in school, I took an art history class, and it was boring! It seemed like no one wanted to be there, including the teacher. This game, however, secretly teaches you and your children about great art through the centuries, as the cards show you the piece and provide an artist and time when it was painted. I thought I knew a fair bit of famous art before this game, but I was mistaken, as there were so many works in here that I did not recognize. I found myself learning without even trying to, and feel like that was an added benefit to a great game. For this reason alone, I think it is a game that belongs in the classroom and homeschool environment, in addition to on a family's game shelf!