Lessons from Annabelle: Creation -- Standing Up to Spiritual Warfare 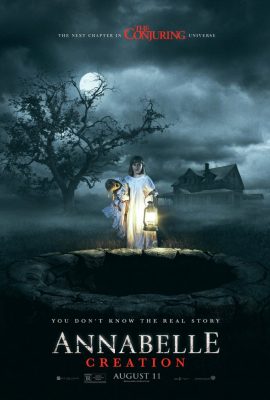 Covering horror genre films is not my typical beat, so when I found myself invited to an advance screening of the soon-to-be released film ANNABELLE: CREATION (watch from my review coming tomorrow), I took a moment to pause and pray. At the advice of a priest with a healing ministry, I am extra cautious about the choices I make these days. Could I, in good conscience, place myself in contact with this type of content?

After prayer and for a variety of reasons, I decided to participate in the screening and subsequent "junket" to interact with the film's cast and crew. You can imagine my relief when the night of the screening came and I found myself seated one spot away from a holy priest of the Archdiocese of Los Angeles. "I guess I'm going to be ok," I told myself, praying that I wouldn't soon be clutching Father's arm for courage.

While I'll leave my full review of the film for tomorrow, I'm happy to share that the priest who was seated near me made himself available for interviews the day of the junket. And as excited as I was to meet the stars whose portrayals are so excellent in this film, I was even happier to huddle with Father in the corner of a Los Angeles ballroom and pose a few spiritual questions that had been prompted by the film. To put them into context, I'd like to first share a synopsis of ANNABELLE: CREATION:

Several years after the tragic death of their little girl, a dollmaker and his wife welcome a nun and several girls from a shuttered orphanage into their home, soon becoming the target of the dollmaker´s possessed creation, Annabelle. 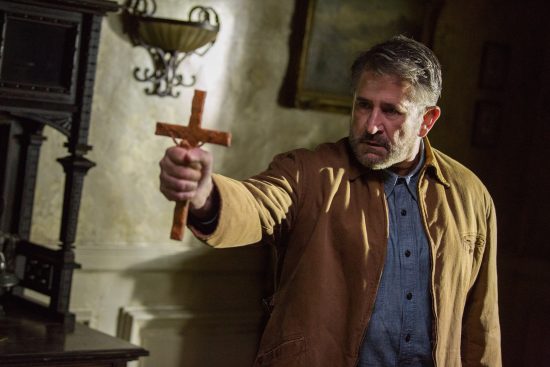 There is a line in the film's production notes (a resource provided to reviewers) that immediately caught my attention. The notes shared that at the request of certain cast members, a priest had been brought in to bless the set and the prop Annabelle dolls. Perhaps those cast members felt what I did: worry over the open invitation of any evil into our hearts. So when I had my opportunity to interview the priest, I opened with a few questions that likely amounted to private spiritual direction. Could I, in good conscience, write about this movie? What he shared with me in terms of my own behavior encouraged me that the release of this movie and the fact that it will be in the popular zeitgeist for the next week or two provides us with a good chance to talk about the topic of spiritual warfare.

First, I'd like to share a few of Father's direct responses to my questions on this topic:

Q: For Catholics who are interested in seeing Annabelle: Creation, are there any spiritual precautions you would recommend taking when viewing entertainment that contains themes related to spiritual warfare?

A: First of all, I would not recommend taking any children to see this movie. (No one under 13 years old. Even then, is the young person capable of seeing something like this movie without being traumatized?) Another part of the movie that we need to understand is that demons cannot do to people what we see in the movie. They will not rip people in half or peel someone’s fingers from a crucifix. Demons can only do what God allows them to do.

In spiritual warfare, we need to comprehend the relationship that is taking place. The victim is only a victim because the has invited the demon into his/her life. Or in the case of a curse, the victim was open to receiving the curse.

Q: For parents with impressionable children, how can pastimes such as tarot cards, ouija boards, or even some popular books and movies be a slippery slope into true evil?

A: The first commandment is “I am the Lord your God have no other gods before me.” By inviting the presence of a demon into our life, God will allow this to happen because He does not force our hand. We have free will. But we have consequences that go with our choices. Therefore, if someone plays with an Ouija board, then there will be a demon present with that. The same goes for playing with Tarot cards or practicing spells that someone reads in a book or sees in a movie. Each of the “ports” that I mentioned makes the person more open to being under attack.

Q: What spiritual lessons can we learn from Annabelle: Creation?

A: We are going to be tested in our faith. There will always be trials in our life but along the way, are we trusting that God will see us through the trials. The couple (in the film) was suffering because of the loss of their daughter.  As a result they took it upon themselves to call upon “any spirit” that could bring their daughter back to them. Initially, it seemed as if this arrangement of having the presence of their daughter in the house was going to work until they discovered the presence of the demon. We don’t have control over any situation that a demon is invited in. At that point, it requires a renunciation on the part of the person who invited it in and the authority of Jesus through the presence of the priest to drive it out. 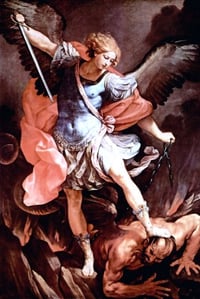 Now that you've read Father's responses to my questions, I want to share with you what I learned from this experience. First and foremost, I was glad for my reflexive instinct to pray about my decision to cover this film. I'm glad I went and did it (and I'll explain why in my review tomorrow), but I'm also very glad that I prayed a Rosary en route to the theater and that I kept St. Michael the Archangel on speed dial at several points over those few days.

I'm especially glad for Father's reminder that we need to be cautious about voluntarily opening "ports" that leave us open to spiritual warfare. This was the same wisdom given to me by the priest I met a few years ago after my travels in Rwanda left me reeling with some severe symptoms of anxiety. But one line that Father shared above bears repeating over and over:

Demons can only do what God allows them to do.

A few days ago, the Archdiocese of Los Angeles' Angelus news source ran an interesting article related to this very topic. In Why this Catholic priest objects to the 'private exorcist' trend, the final line of the piece underscored this same theme. While the priest quoted there is not the priest I interviewed, the article ended with some similar wisdom:

“If people would build up their faith lives, the devil will be defeated.”

So perhaps one of the greatest personal blessings for me in the whole "go cover a horror film" experience was the unexpected reminder to shore up my prayer life. It's not an exaggeration to say (and I am somewhat embarrassed to admit) that I prayed far more over those few days than I normally do during normal workdays.

I prayed for my own spiritual protection.

I prayed for us parents as we endeavor to shepherd our children safely through a complicated culture.

I prayed for peace in our world and a release for those who are caught in the clutches of pure evil in its many forms.

I'll be back tomorrow with additional thoughts on ANNABELLE: CREATION. If you have seen any of the previous films in this series or have thoughts on this topic, I would love to hear from you.

Prayer to St. Michael the Archangel

St. Michael the Archangel,
defend us in battle.
Be our defense against the wickedness and snares of the Devil.
May God rebuke him, we humbly pray,
and do thou,
O Prince of the heavenly hosts,
by the power of God,
thrust into hell Satan,
and all the evil spirits,
who prowl about the world
seeking the ruin of souls. Amen.