Obsession: A Strategy Game by a Catholic Creator

Stuart Dunn reviews a strategy game that will appeal to fans of Downton Abbey and Jane Austen - from a Catholic creator.

When we look through the history of popular culture, Catholics have been dominant players in arts, music, and literature. We have been gifted with the likes of Michelangelo, Beethoven, and Dante. I would like to present the case that Dan Hallagan is one of our latest Catholic treasures. Dan Hallagan is the owner of Kayenta Publishing, where he has published three books and one AMAZING board game called Obsession. 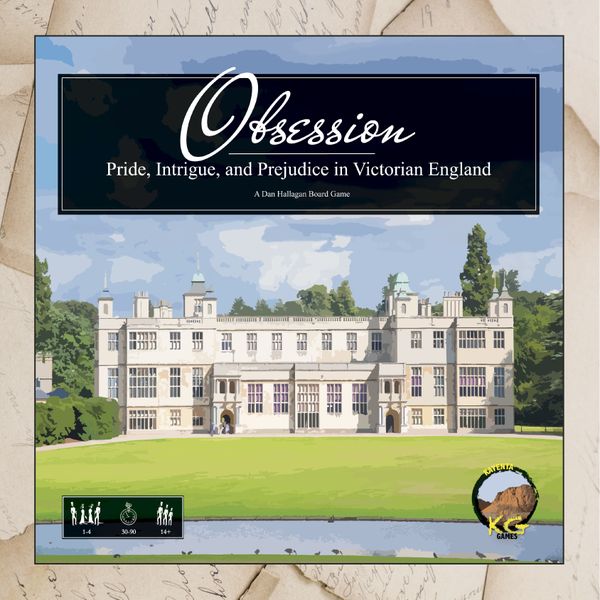 Obsession is a strategy game set in the time of Victorian England. In this game, you play the role of a family from Derbyshire who has recently come into some money. You will use that money to improve your estate and reputation with the ultimate goal of marrying off your eligible young man or woman to one of the Fairchilds. The game plays 1 to 4 players (5 if you buy an expansion), and takes between 30 and 90 minutes to play.

I won’t go into great detail how to set up a game, as Mr. Hallagan provides an excellent video on how to do so. Instead, I will give you a brief summary of what happens during setup. In reverse player order, players will pick a Family Player Board that provides them with a small variable setup bonus (extra money, extra reputation, extra family member, and so on), four Family Member cards, two Starter Guests, and Servant Meeples that consist of a Butler, Housekeeper, Valet, Lady’s Maid, and Footman. You are also giving five Starting Improvement Tiles that consist of a Private Study, Butler’s Room, Main Gazebo, Front Parlour, and Bowling Green.

The main game area is then set up by seeding the Supply Board and Round Track with extra Servant Meeples (number determined by player count), Objective Cards, Money, Casual Guests, Prestige Guests, many more Improvement Tiles, Theme Cards, and of course, the Fairchild Cards. It feels like a lot your first time or two playing the game, but you quickly get used to what goes where.

Like the Setup Summary above, I am not going to go into a detailed explanation of how the game plays. Again, Mr. Hallagan has provided videos for that. I will provide a brief summary again for you. Before beginning the game, you will decide if you are going to play a Standard game (16 rounds) or Extended game (20 rounds). Each round consists of one turn for each player with a turn looking like the following:

Obsession is a game that I would describe as simply beautiful and beautifully simple. Let’s unpack that statement though, starting with the latter part. By simple, I don’t mean you play this game once, have figured it, and don’t need to play it again. I mean the actions are simple in execution, but require some foresight and planning to maximize your turns. Yes, you can flip this Improvement Tile and use some guests that will net you a generous amount of money and some reputation, but in doing so, you’ll exhaust some valuable servants which could potentially make your next turn weaker.

Once you have figured out the basics of the game, you can then dive deeper into the nuances and intricacies of the game. You can try different families and see if you prefer one starting bonus to another. Will you play with Open Courtship where information is known, or play blind and have to be fluid in your strategy? Will you employ a Servant draft and try to further capitalize on your family’s starting bonus? You have many different ways to keep this game fresh and interesting.

I’d like to take a moment now and talk about the theme of the game. On the surface, this seems like a theme that wouldn’t normally appeal to the stereotypical gamer. Instead, it would appeal mainly to women, specifically Jane Austen fans. However, that is not the case as the theme is strong in this one. In fact, you could say it is dripping from the box when you open it. If you’ve ever watched Downton Abbey, it feels like a board-game version of that television show. Yes, I’m aware that show wasn’t set during Victorian England, but it has the same Upstairs, Downstairs feeling of the gentry and the servant class. By no coincidence, that is the name of one of the expansions for this game.

I find what really helps with the theme of this game is the Guest cards, as they give names, pictures, backstories to the people you are inviting over to your activities. It would have been easy to have nameless and faceless cards that just give you money or reputation, but it wouldn’t have drawn you into the game and just felt mechanical. My wife and I also like to give our servants names, so that we can summon them to our activities. Fun accents also help add to the theme. Yes, we’re a bit dorky, but who cares? As long as we have fun!

I’ve played this game about five times, primarily at 2 players and once at 3 players, and it has played smoothly in all plays. It is what I would consider a game with average difficulty, meaning if you have played modern board games, you’ll be able to pick it up fairly easily. If you haven’t, then it might take you a play or two, but you’ll get the hang of it quickly. Through all my plays, I always learn something new and always try something different, but the one thing that has stayed the same is my awe of this game and the designer.

You can tell from every facet of this game that much time and even more love went into this game. I look forward to seeing more games coming out from him in the future, and I will be at the front of the line to support him and his company!