Use Medals to Create Beautiful Mosaics 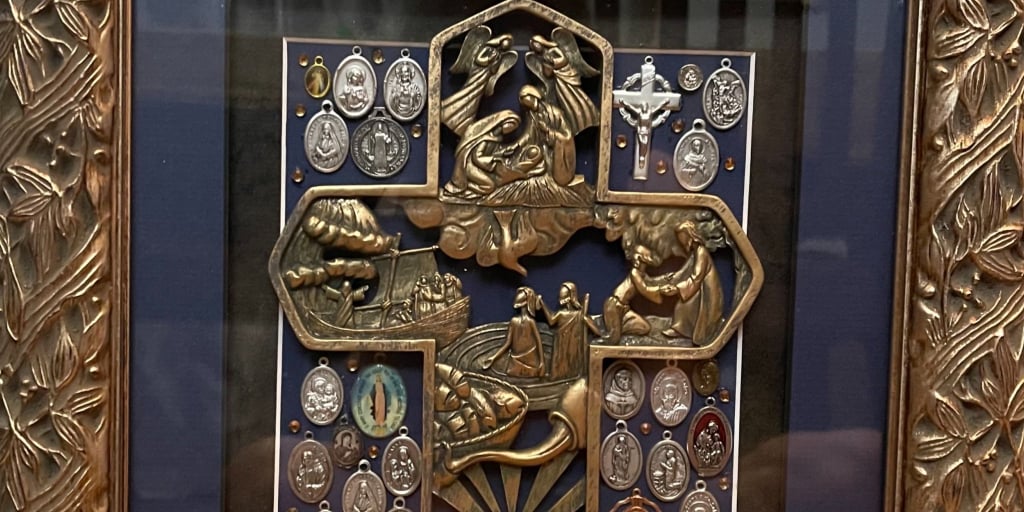 Patti Maguire Armstrong explains how to create a keepsake by surrounding a cross, crucifix, or holy image with religious medals.

Catholics love our saints. That’s why saint medals are so popular. Getting them blessed makes them a sacramental, bringing us an element of spiritual protection. A person can only wear so many medals on a chain at a time, however. So, I found with another way to enjoy the blessings of medals — turning them into mosaics.

The first time that I attempted one of my medal mosaics, I bought the supplies, laid them out on my dining room table, and took a deep breath. I’m not a master crafter so I had doubts about what I was attempting to do. Surprisingly—at least to me — it came out beautifully.

The idea for the mosaic came during a visit to a private chapel in Taylor, Michigan dedicated to Rose Marie Ferron, nick-named "Little Rose.” Rose was born in Quebec in 1902 to a large, working-class family, according to the Mystics of the Church website. In her mid-teens, she was stricken with a mysterious illness which confined her to bed. In 1925, the family moved to Woonsocket, Rhode Island, where Rose spent the remainder of her life partially paralyzed yet accepting her illness as her vocation to suffer with Christ for the conversion of sinners. In 1926 and 1927, Rose is reported to have received the stigmata or wounds resembling those of Our Lord. Often, her family heard her asking Our Lord to spare others and to give her their miseries and sufferings. She died on May 11,1936 at the age of 33. 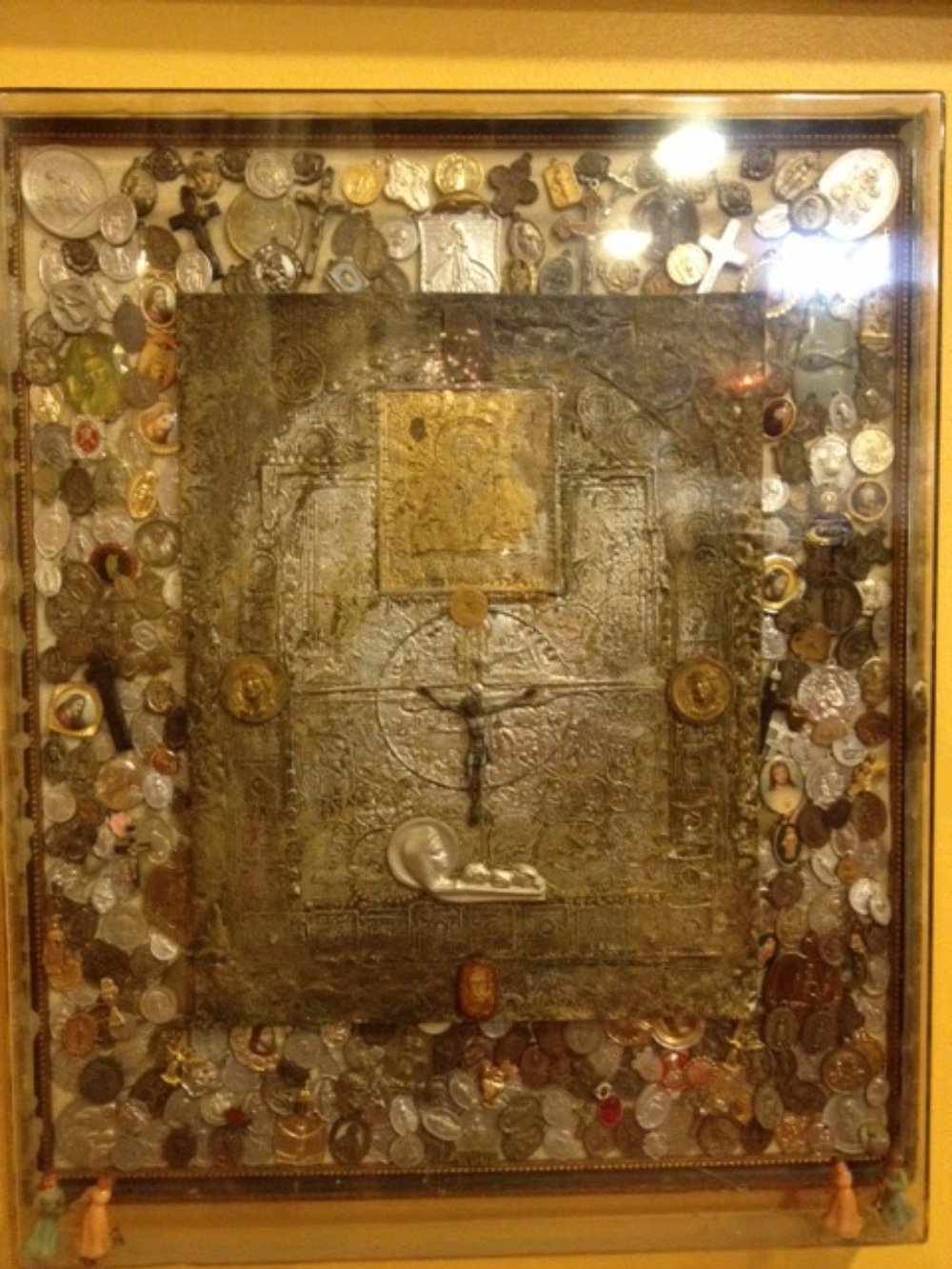 My sister Colleen had heard about the chapel and brought me to it. We were both drawn to a framed crucifix surrounded by medals. We studied it and wondered if we could duplicate some semblance of it. A couple years later, I attempted it. My creations came out more as mosaics. I have made many as wedding gifts — something special that is not going to show up on a wedding registry. I have also made a few for friends.

The pictures speak for themselves, but I will offer some tips. I use clear adhesive, E6000, which bonds to everything from metal to paper, and wood. Initially, I made a couple by sewing the medals to black velvet and framing it. That was very time-consuming, and I was not satisfied with the look. I knew that the original creation in the chapel had been glued, yet I was reluctant, feeling the medals unchanged. An artist friend, however, pointed out that it was a work of art and not something that people were going to be using. 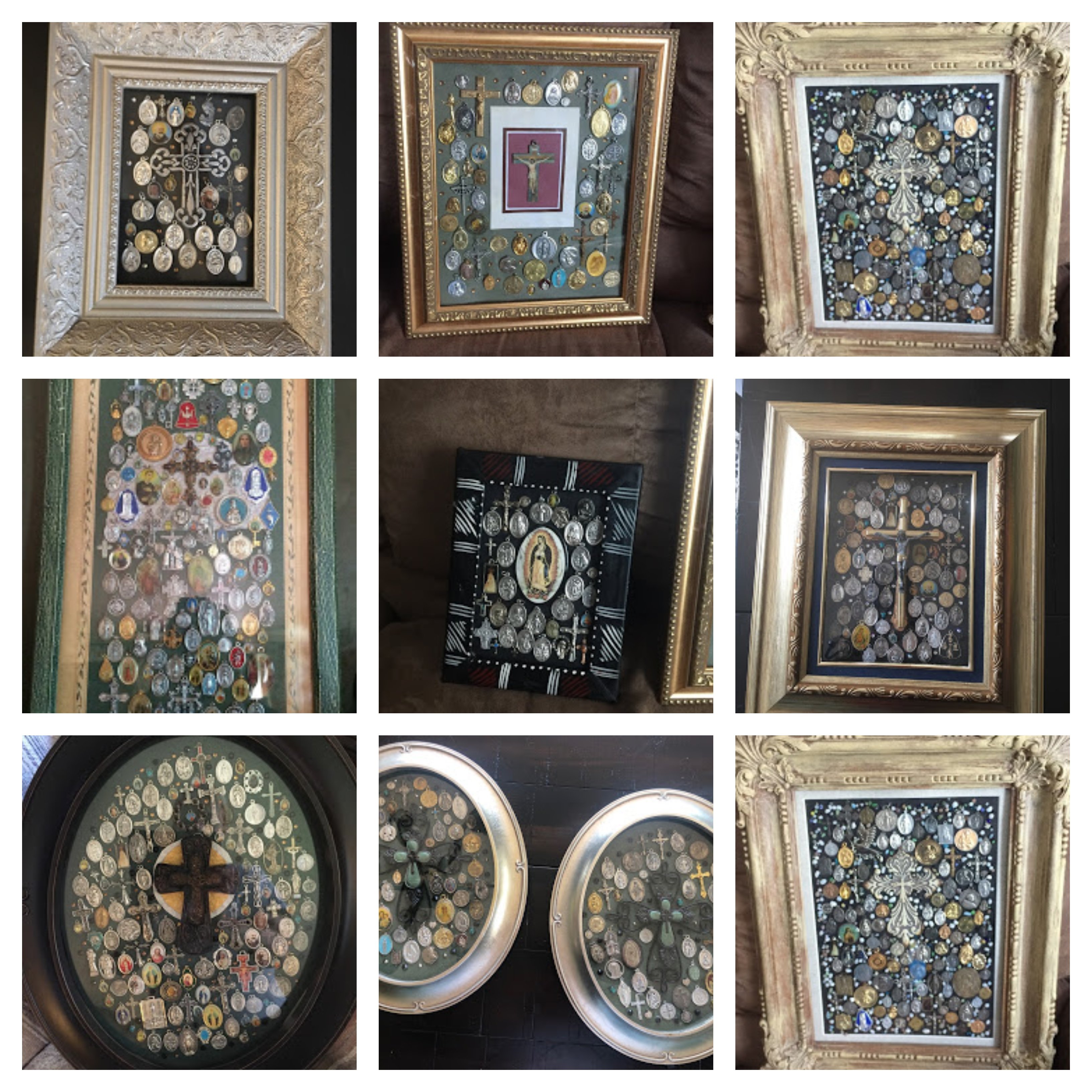 From that point on, I’ve been gluing the medals. I sometimes add small mosaic stones to fill in spaces or very small rhinestones for a little sparkle. I select specific colors I want to use for the background and then a complimentary color for the matting which I get cut at a store’s framing department.

The medals were often purchased but these days, friends and acquaintances bring them to me after cleaning out an elderly relative’s house. After blessing one for me, my pastor expressed great admiration for it, so I offered to make a couple for the church office and rectory. He put a small announcement in the church bulletin inviting people to drop off any medals they were not using.

Many of the frames came from thrift stores or rummage sales, although a few were purchased new. The centerpiece is usually something bought specifically for the gift. When selecting a centerpiece, make sure it will fit under the glass in the frame. I’ve made a couple without glass over them, but then it requires dusting.

Click to tweet:Medals have great meaning to Catholics, so fitting them all together around a crucifix, cross, or holy image brings beauty and inspiration together. #catholicmom

When my mother died, Colleen asked me to make a mosaic for her using my mother’s rosary and a white plastic crucifix with a silver corpus identical to one we had in our home during the 1960s and 70s. Those medals were all purchased by Colleen who had selected many saints special to her.

Once the piece is completed, use glass cleaner on both sides of the glass and check carefully for any spots before sealing it up. I will often ask a priest to bless it before gift-wrapping. Typically, while at the rectory or waiting for a priest after Mass, people who see it express great enthusiasm and want to just stare at it for a while. It seems that bringing so many medals together lends itself to a natural beauty.

When my friend Susan posted a picture to the Facebook page, Catholic Modern Farmhouse Decor Inspiration, of one that I gave to her daughter, (my goddaughter) Maria, after 2 days, it had almost 800 likes and lots of questions about how to make one. 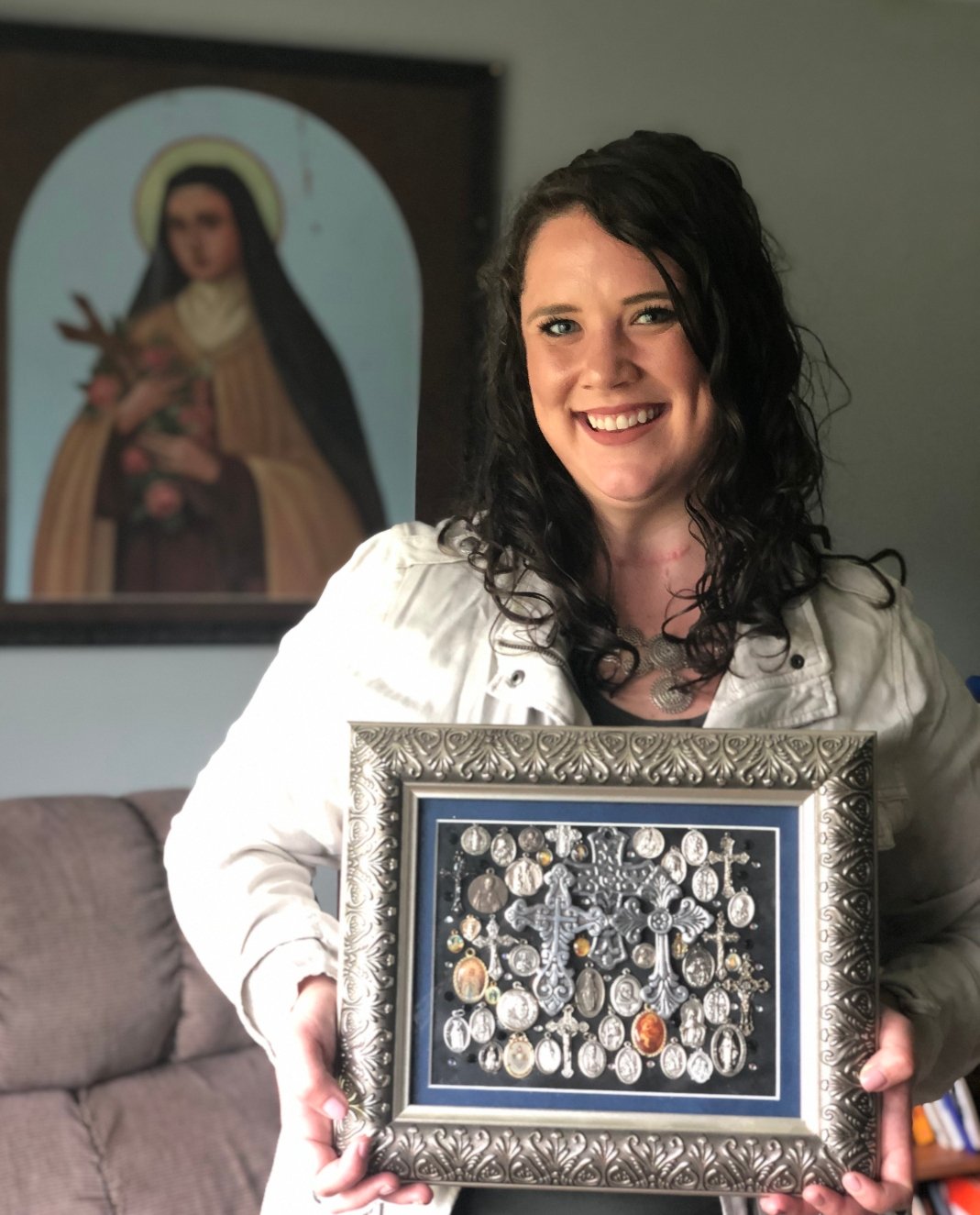 I’ve made a couple dozen of these in total. The medals themselves have great meaning to Catholics, so fitting them all together around a crucifix, cross, or holy image brings beauty and inspiration together. You can even make it a religious experience by asking each saint on the medals to pray for you and if you are gifting it, for that person too. As a bonus, I started making a list of all the saints for the recipient to enjoy all the more. The great news is that anyone can do it. It’s a project of the heart that does not demand any special talents.

Editor's note: We'd love to see the medal mosaics you create! Tag @catholicmomcommunity on Instagram when you post your photos.