Summer Movie Challenge - The Blind Side 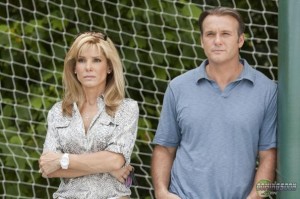 As I shared last week, I've decided to enjoy some good films this summer by working my way through the USCCB's top ten film recommendations for 2009. I am going through the list from top to bottom, which made last week's pick The Blind Side starring Oscar winning actress Sandra Bullock.  I am pretty sure I'm the last person in the country to watch this film, which was one of the big hits of 2009.  You can view the USCCB's complete review of the film here.

Let me preface my remarks by saying that I sort of consider myself a "football mom".  Although Eric now plays musical instruments instead of lineman, I spent way too many hours standing next to fields watching my son get hit.  Nothing can put fear into a mom's heart like watching her kid get pulverized by a bigger, stronger player.  I'm also a big college football fan, and could definitely be called a "booster" of my alma mater.

I watched the film last weekend, surrounded by my family on a road trip.  They began to laugh at me within minutes of starting the film, as I was alternating between hearty laughs and sniffling sobs.  Some of our readers' comments about the film had piqued my interest and made me ask myself, "How would I respond if a 'Big Mike'" came into my life?"

The truth is, I don't think I could have had Leigh Anne Tuohy's openness of heart.  I might have had the best of intentions.  I likely could have written checks to help with tuition, bought clothes, and fed a child like Michael.  But would I really be Christian enough to open my home to a troubled teen so greatly in need?  Perhaps that would put me in the class of Leigh Anne's obnoxious friends, who made light of her willingness to take in one so different from themselves.  In truth, it's likely that my protectiveness of my own teens might keep me from taking a risk -- and in turn would likely keep me from teaching them the important lessons that Sean and Leigh Anne modeled for their children.  You really can't watch this film without asking yourself, "What would I have done?"  I'm sad to say I would have failed the test...

This film is one I'll definitely watch again, probably multiple times.  The characters are lovable and the storyline plays out in gripping fashion.  Bullock's Leigh Anne can be spicy at times, so I do feel that the Bishop's AIII rating (for adults) is merited.

Next up on my list:  The Class.  Here's the trailer: