God's Gift to Our Family 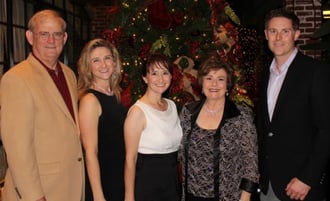 God's Gift to Our Family

Five years ago, my father had a major heart attack while at our ranch in rural central Texas. Thankfully, our uncle was with him and managed to get him to the county hospital on those dirt roads faster than anyone has dared driving on them before. Miraculously, when he arrived the local doctors immediately implemented a brand-new, grant funded, emergency Life Flight specifically created to transfer rural heart attack patients directly to a cardiac surgeon in downtown Austin. Before the rest of our family even left the Houston area, Dad was in the air. We later learned that Dad nearly didn’t survive the journey. Without that program in place, we very well might have lost him.

It was a Sunday. Brian and I were at the house preparing lunch for the kids when Mom called. It was one of those phone calls where you immediately know something is wrong. I remember just sitting on the couch afterwards, not knowing what to do and feeling completely lost. Shelly and her family had taken a day-trip to Louisiana and were returning as quickly as possible. We decided that Mom and our brother would drive to Austin while I would wait for Shelly to return so she and I could drive together.

I sat and waited, cried and prayed. My husband held my hand and sat with me. I prayed the rosary using the Rosary Army podcast on my iPod for the first time.

Because everything happened so fast, including the rural Life Flight, Dad arrived in Austin ahead of Mom. Upon arriving in Austin, the EMTs were surprised to be greeted coming out of the helicopter bay by so many people - Dad’s sisters, their husbands, nieces, nephews and friends. We were so very thankful they were there when we couldn’t be. Ironically, before Shelly and I even got on the road, Dad went into and came out of surgery and we learned he was expected to survive.

For the first time in many years my parents and their three grown children were together without any in laws or grandchildren. For two days it was just us in a little hospital room for many hours. There were lots of tears, but also many laughs and jokes, the kind of crazy things that remind you of hanging out with your family as a teenager on a Sunday afternoon. Dad kept insisting that he needed regular clothes for the moment (in a few days) when he would be released. Everything he’d packed for the weekend waited 2 hours away at the ranch, so Shelly and I hit the stores for new clothes. Trying to follow his specific instructions for pants, shoes, even undershirts, proved to be quite a bonding experience. We laughed really hard at the store.

The entire experience, though scary and horrifying, when we considered that Dad almost lost his life, turned out to be quite positive for our family.

In the past five years we’ve changed as a family in ways we would not have imagined. Even though we’ve always been a close-knit family, something has changed. We recognize the inevitableness of losing one of our parents. We see the fragility of life and how quickly the unexpected happens.

Dad has changed since the heart attack. Though he still has immense responsibilities at the company, he cut back his hours, taking the time to train others to handle key directions. He consciously makes more time to be with the grandchildren and to exercise daily. For two years at Spring Break he has taken the whole family on a road trip – 9 days, 15 people, 3 minivans and 2,000 miles driving to West Texas and back and another big driving trip to Colorado in the Summer of 2011. We had a marvelous time.

As siblings, we’ve grown closer, strengthening our relationship, talking about how we’ll continue as one family – not three separate ones – when we do lose our parents.

My father has always been the rock of our family, the captain of our ship. The thought of losing him isn’t any less frightening now than it was five years ago, but we recognize that these past five years have been a true gift from God. When I look back on that day and consider how many things were in just the right place at just the right moment… I know it cannot be mere coincidence. We thank God for giving us this time as a family, to continue to grow closer, to know each other, to reconnect, and to be prepare ourselves for the future.