Working Out a Plan with Opus Domini

Like just about everyone else in the world, I begin a new year with all sorts of great ideas about getting organized. One of those ideas developed, mid-January, into a desire to repurpose my underutilized iPad (which had become little more than a portable social-media device). I could kill two birds with one stone, I figured—justify the existence of my tablet AND do something about the paper clutter that was burying my desk. 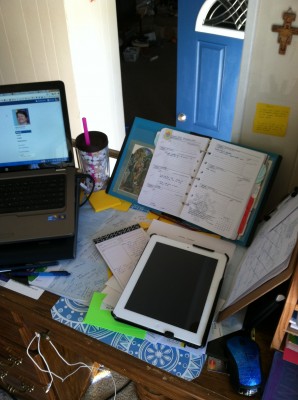 My desk, BEFORE Opus Domini

I had my paper planner, my work calendar, two project tablets, a bunch of post-it notes AND a blotter covered in various scribbles. It was not a peaceful place to work.

At about the same time, Lisa was writing about her search for an app that would let her organize her various projects. I eagerly got in on the discussion and test-drove (and rejected) an app or two before settling on one app to try in a more intensive manner.

I decided to spend a week working with the app Opus Domini. This app syncs between devices, so when I’m out running errands I can check tasks off on my iPhone. 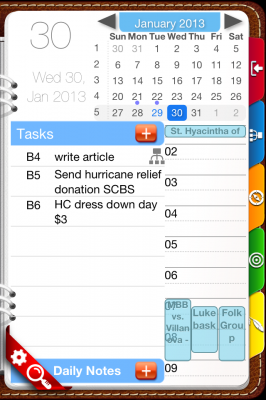 view on my iPhone

If you used (and liked) the Franklin Covey planner, this app is for you:  it combines your calendar, master task list, goals and more. The iPad app even has a spot on the daily page that shows the current weather. The level of detail on the iPad view is amazing. 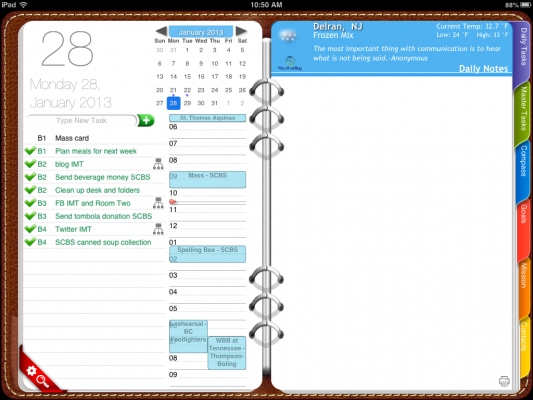 View on my iPad with calendar and notes 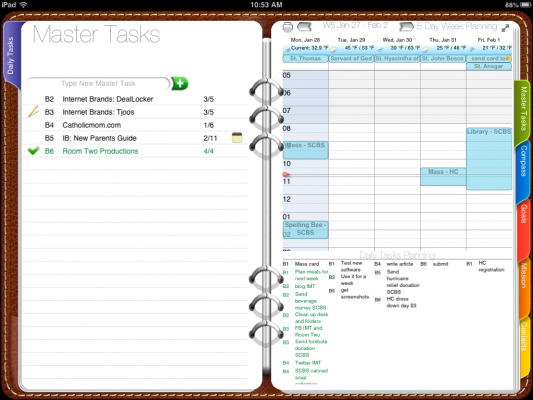 View on my iPad with calendar and tasks

Opus Domini is powerful but pricey, at $8.99 for the iOS universal app. Because of size constraints, not all the features available in the iPad app can be found on the iPhone app, but that hasn’t slowed me down much. There is also a Mac app for your computer. Opus Domini is not available for Android.

I did run into a couple of syncing glitches; it was a bit complicated but I found a detailed tutorial at the Piso13 homepage, and I even used their tech-support forum, which I found to be speedy in offering a solution to my questions. To be honest, I only stuck with it because I was writing this article—if I didn’t have that extra bit of motivation, I’d probably have abandoned the app right there. I did figure it out eventually, and I’m glad I did, because this app can do a lot.

After using this app for ten days, I’m definitely hooked. It’s been a week since I wrote anything in my paper planner—and I’m a confirmed paper-and-pencil girl. It’s been so handy to have my entire schedule in my pocket, on my phone. I’ve even managed to (mostly) keep my desk clean! 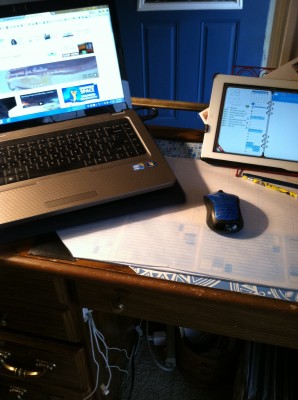 My desk now, AFTER Opus Domini

And I’ve found that I’m much more productive when I take a few minutes to plan out what I want to accomplish in a particular day.