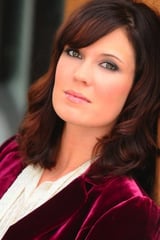 Editor's note: I recently had the amazing opportunity to conduct a telephone interview with the talented young actress Erin Bethea. You'll likely recall Erin as the talented young actress who played Kirk Cameron's wife in the film Fireproof. But our conversation this week related to Erin's work on the film This Is Our Time, which was recently on DVD. The film, which just won Best Feature at the International Christian Film Festival, is the kind of movie we parents want in our homes. I'll include the film's trailer below and hope you'll check it out here. LMH

THIS IS OUR TIME

inspiring movie about following the call of God, comes to DVD and Blu-Ray April 16

Los Angeles, Calif. -- THIS IS OUR TIME, an inspirational film about what it really
means, and what it really takes, to follow the call of God in your life, is coming to DVD
and Blu-Ray on April 16. It will be available nationwide at Family Christian Stores and
most Christian online and brick-and-mortar retail stores nationwide.

The movie, distributed by Pure Flix, follows the post-collegiate lives of five friends
connected by their strong belief in God who all long to make a meaningful difference in
the world. But when tragedy strikes the close-knit group, their friendship and their faith
are tested in ways they never imagined.

“The experiences the characters in THIS IS OUR TIME face are the kinds of real-life ups and downs, successes and devastation, all of us encounter living life,” said Lisa
Arnold, the film’s writer, director and co-producer. “I wanted to tell a story that would
resonate with young people just stepping out into the world to make their mark that
would help them see that no matter the circumstances they face, God is always with
them, loving them, guiding them.”

The movie tells the interwoven stories of Luke (T.J. Dalrymple) and Alé (Erin Bethea),
who marry right after school and move to India to serve as missionaries for Embrace A
Village, a ministry that cares for those afflicted with leprosy and their families; aspiring
financier Catherine (Kate Cobb), who joins a prestigious financial institution determined
to make an impact on corporate America; Ryder (Matthew Florida), who lands an
impressive job in social media and can’t wait to use the powerful medium for a greater
good; and Ethan (Shawn-Caulin Young,) seemingly the odd man out, who struggles to
find his God-given-purpose and feels sidelined by God.

“What they all come to learn is that it never really was their time,” Arnold said. “It always
was, always is, God’s time.”

THIS IS OUR TIME has received The Dove Foundation’s Family Seal of Approval
(earning the highest rating of five Doves) and is recommended for all ages. It also
features appearances by Hollywood veterans Eric Roberts, Erik Estrada and Dawn
Wells.

Coinciding with the movie’s DVD release, Pure Flix is teaming with Family Christian
Stores and other Christian retailers to award eight $2,500 college scholarships through
registrations submitted through FamilyChristian.com and other websites representing
more than 2,000 retail outlets nationwide. Participation eligibility and rules can be found
at www.thisisourtimemovie.com.

Pure Flix- Pure Flix is a Christian movie studio that produces, distributes, and acquires
Christ-centered movies for the sole purpose of changing our culture for Christ, one heart
at a time. Our mission since day one has remained the same and we continue to strive
to make a difference for His name. Learn more at www.pureflix.com