Win "The Miracle of Father Kapaun" Book and DVD

As we prayerfully journey though the Fortnight for Freedom, our friends at Ignatius Press and Carmel Communications have partnered to offer our readers a great contest opportunity. We're giving one winner the combo package of Father Kapaun media which is sure to inspire:

The Miracle of Father Kapuan - Book 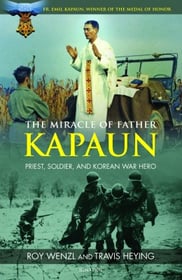 The Miracle of Father Kapaun

Emil Kapaun—priest, soldier and Korean War hero—is a rare man. He is being awarded the Medal of Honor, the nation's highest military award, and is also being considered by the Vatican for canonization as a saint.

As remarkable as this double honor are the non-Catholic witnesses who attest to Father Kapaun's heroism: the Protestants, Jews and Muslims who either served with the military chaplain in the thick of battle or endured with him the unbelievably brutal conditions of a prisoner of war camp. As journalists Roy Wenzl and Travis Heying discovered, all of these Korean War veterans, no matter their religion, agree that Father Kapaun did more to save lives and maintain morale than any other man they know.

Then there are the alleged miracles-the recent healings attributed to Father Kapaun's intercession that defy scientific explanation. Under investigation by the Vatican as a necessary step in the process of canonization, these cures witnessed by non-Catholic doctors are also covered in this book.

The Miracle of Father Kapaun - Movie

Servant of God Fr. Emil Kapaun may not be well-known. But he should be. The son of Czech immigrants, Fr. Kapaun grew up on a small Kansas farm. But this seemingly ordinary farm boy became one of the most inspiring heroes of the Korean War—and unlike many war heroes, this military chaplain is also on the road to sainthood. His cause for canonization has been opened by the Diocese of Wichita, and two medical miracles attributed to him are being investigated by the Vatican. He has been awarded the Medal of Honor, the nation's highest military award.

In this powerful documentary, learn his inspiring life story, his heroic work as a chaplain during battle, and his leadership and comfort of fellow American prisoners after capture and torture by the Communists. This imprisonment under incredibly harsh conditions ultimately led to his death at 35 years of age in 1951. The film features interviews with the soldiers who were imprisoned with Kapaun in Korea, as well as with church officials, military historians and the Kansas family who is convinced Kapaun’s miraculous intercession saved their son’s life. A man of incredible courage and faith, he is credited with saving the lives of hundreds of prisoners, instilling them with hope when all hope seemed lost.

His fellow soldiers already consider him a saint, and one memorial in his honor by the military says of Fr. Kapaun, “He was all man and all priest.” Includes prayer card. Movie is shown in color.

To enter to win this prize combo, leave a comment below by Midnight Pacific time on Wednesday, July 3, 2013. One winner will be randomly selected on July 4, the conclusion of the Fortnight for Freedom, to receive this prize package.

Update: Our winner Kim has been notified. Thanks to all who entered this contest, and to the publisher for this wonderful gift package.