Graphic Novels about the Saints from Pauline Books & Media

I have to hand it to the folks at Pauline Books and Media: they continue to delight me with the products they send me.

When I see the brown envelope in my mailbox, addressed so politely to "Mrs. Sarah Reinhard," I always know there's a treat inside. And late last week, what should arrive but... 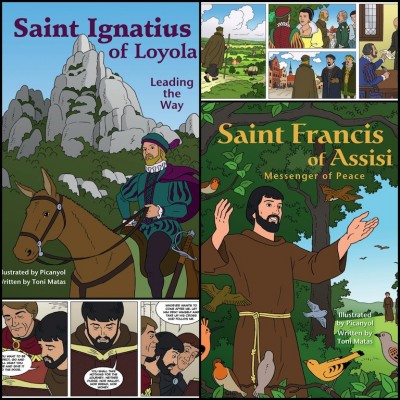 ...GRAPHIC NOVELS ABOUT THE SAINTS!!!

(Yes, it warrants all caps. Really.)

There's a series of four planned, and the first two have been released: Saint Ignatius of Loyola: Leading the Way and Saint Francis of Assisi: Messenger of Peace. I showed them to my eight-year-old and promptly hid them, because I want to read them first before they are shuffled into the bowels of her book organization.

They're beautifully done and they remind me of the Picture Bible that planted the seeds of the love of the Word of God in me when I was a child.

They're designed for ages 8-10 (through 36, I think) and were written based on historical records. And the artwork! The artwork!

Next in the line-up: graphic novels about Saint Joan of Arc and Saint Bernadette. Why yes, I am reallllly looking forward to those! (And so is my daughter. But I may or may not tell her when they arrive...)

Here's a bit about each of the two books they've just released:

In the year 1491, in the Spanish town of Azpeitia, the Lord of Loyola and his wife give birth to a son, Ignatius. Growing up to serve the royal court of Castile and fight as a knight against the French, Ignatius seems to be fulfilling his dream of living like the men described in his chivalry and romance books. But when he starts reading about the life of Christ and the lives of the saints, he starts to feel unfulfilled by his current ways…

What causes Ignatius to reconsider his lifestyle? Will he continue his military career? Or will he discover how to be a very different kind of "soldier?"

In the year 1181, in the Italian city of Assisi, a rich merchant and his wife give birth to a son, Francis. Francis grows up living a carefree life of luxury and extravagance, much to his parents' dismay. When war breaks out between the cities of Assisi and Perugia, Francis-enchanted by his dreams of knighthood, longing for chivalrous adventure, and quest for military glory-eagerly joins the fight. But when Francis is taken prisoner and becomes very sick, something inside him begins to stir…

What causes Francis to rethink his ways? Is this military path the one he is supposed to follow? Or is he supposed to deliver a message other than war?

Give the Gift of CatholicQuiz.com
Read
Entries Sought for Family Rosary's "Try Prayer! It Works!" Contest
Read
Being Catholic: What Every Catholic Should Know
Read