Coming up soon on my "to-read" list is the new book by noted radio host and author Al Kresta. But I didn't want to wait to share with you Dangers to the Faith: Recognizing Catholicism’s 21st-Century Opponents, so below you'll find the press release for the book. I will say that Al Kresta is consistently a go-to resource for news issues, so this book promises to be both current and well-researched. Enjoy! LMH 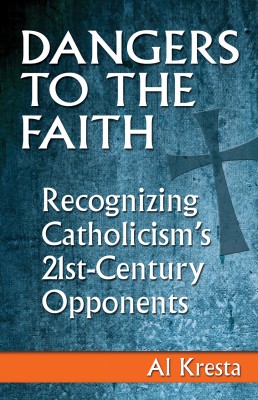 Dangers to the Faith by Al Kresta

HUNTINGTON, Indiana, July 10, 2013 – With his finger on the pulse of popular culture, acclaimed radio-show host Al Kresta addresses the primary challenges to the Catholic Church right now – some from within, others well beyond.

Kresta – a former Protestant minister who became Catholic – is quick to admit that Catholics tend to be under-informed on the truths of their faith, and not well-primed to flag sophisticated and seemingly well-reasoned assaults on it. With 100 million self-identified U.S. Catholics, less than 20 percent attend weekly Mass.

To assist the Church in telling its story, Kresta puts forth a first-of-its-kind clarification of popular worldviews at odds with Catholicism, unveiling truths and unmasking counterfeits. Dangers to the Faith: Recognizing Catholicism’s 21st-Century Opponents (Our Sunday Visitor, 2013) delves into many of the subjects discussed exclusively on Kresta‘s syndicated daily radio show heard on over 200 stations, while maintaining a tone that is fair, accessible and clear – as is Kresta‘s singular style.

"No other book addresses as many modern-day counters to Catholicism as this one does," says Kresta. "I wanted to give Catholics and others intellectually mature arguments and rationale for identifying and understanding oppositions to the Church, and seeing how everyone is affected by them." To this end, he looks at the thought behind icons like Oprah, Christopher Hitchens, Steve Jobs, Tiger Woods, Stephen Hawking, and Depak Chopra.

Whether clarifying the New Atheism or celebrity spirituality, ancient heresies like Gnosticism, abuses of science or philosophy, trendy consumerism, relativism, progressivism or transhumanism, secular governments, or false concepts of God, Dangers to the Faith addresses their errors and tackles challenges coming from all angles. Clarifying differences in plain language, Kresta allows readers to draw their own conclusions – from reading the actual facts, one issue at a time.

With no shortage of hefty endorsements, the book has earned a thumbs-up from bishops, bestselling authors and syndicated writers, TV and radio personalities, major Catholic philanthropists, religious and academia. Describing in detail the origins and positions of the most significant adversaries to Catholicism, Dangers to the Faith: Recognizing Catholicism’s 21st-Century Opponents gives readers a roadmap for navigating prevailing viewpoints while maintaining a firm understanding.

Unlike any other, the book identifies opponents to the Church in many forms – misconstrued ideas of reality from philanthropists and celebrities; journalistic inaccuracies of history and fact; political rhetoric and its inherent misapplication; competing religious groups distorting Church doctrine; activist groups discrediting Catholic positions; and even professionals and scientists seeking to remake human nature.

Catholics and others will come away with a sharpened cognizance of cultural mindsets, with common doubts assuaged, keener knowledge of Church teaching, and a healthier inclination to defend it.

Order Dangers to the Faith: Recognizing Catholicism’s 21st-Century Opponents and support CatholicMom.com with your purchase