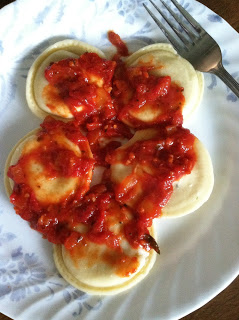 When the Meatless Friday recipe features started running here on CatholicMom.com, it was not Lent. That’s the season that people traditionally associate with Catholics giving up meat each Friday.

Did you know that Catholics are supposed to sacrifice something each Friday, the whole year through? It’s spelled out clearly in Canon Law. Canon 1250 states: "The days and times of penance for the universal Church are each Friday of the whole year and the season of Lent."

The bishops in the USA encourage all Catholics to make a sacrifice each Friday, beginning in 1966 when they stated, "Friday should be in each week something of what Lent is in the entire year. For this reason we urge all to prepare for that weekly Easter that comes with each Sunday by freely making of every Friday a day of self-denial and mortification in prayerful remembrance of the passion of Jesus Christ."

For some people, that sacrifice is made by continuing the Meatless Friday tradition throughout the year. Others choose to observe this penance in different ways.

At the beginning of this month, the Solemnity of All Souls fell on a Friday—so that day was a feast day, not a fast day. When CatholicMom.com’s own Sarah Reinhard made a statement to that effect on Facebook, it led to a discussion about Friday sacrifices. Sarah observed,

I try to keep quiet about it (that whole "when you fast...don't be all pouty" injunction)…. The idea is that you're uniting yourself with the Passion of Christ and also the poor of the world. I can go on, but don't want to be preachy. For me it was a very personal sort of conviction and it DOES keep me in mind that it's Friday and what Friday's ABOUT. Which is...counter-cultural within my own heart. It's been a good thing. And I stumble, fail, and all the usual. And if it's not meat, we are called, invited, "supposed" to do SOMETHING on Fridays that prayerfully unites us with Christ on the Cross (and, I'm told, with the poor of the world).

If your meatless meal involves seafood—which can be pricey—or some kind of family favorite, it’s hard to think of that as a “sacrifice.” But the discipline of the meatless meal is part of the sacrifice. You are sacrificing all the other options you might have had to choose from for your meals that day and submitting to the discipline. That's not incidental to the whole process. Truth be told, it’s the discipline of Meatless Fridays that can be the biggest stumbling block.

In my household, meat is not served on Fridays. I can’t stop anyone from cooking it for themselves, or ordering it if we happen to eat out. But I don’t cook it, and I don’t eat it. It’s not something I make a big deal about at home, though I’m thinking maybe I should. I mean, will the kids just pick this up by osmosis? Probably not.

Does your family observe Meatless Fridays all year long? If not, think about giving it a try for the penitential season of Advent, which begins this Sunday.

Tell us about your household’s Friday customs! Do you abstain from meat on Fridays all year or only during Lent? And do you feel called to make some other type of Friday sacrifice?