Fly Me to the Moon! Let Me Play Among the Stars!

One of the biggest selling points Steve Jobs had for the iPad was that it would be a perfect educational tool, allowing students to carry a library's worth of books and experience things that might not have been within reach before. Students would be able to touch and move things around on the screen in a way that was much more difficult to do on a computer screen.

When I got my iPad, one of the first apps I purchased was Star Walk, made by Vito Technologies, Inc. The app makes use of the accelerometer and camera in the iPad to sense the direction you're facing, as well as the Wi-Fi or cell tower signals (if you have a 3G- or 4G-equipped iPad) to pinpoint your location. 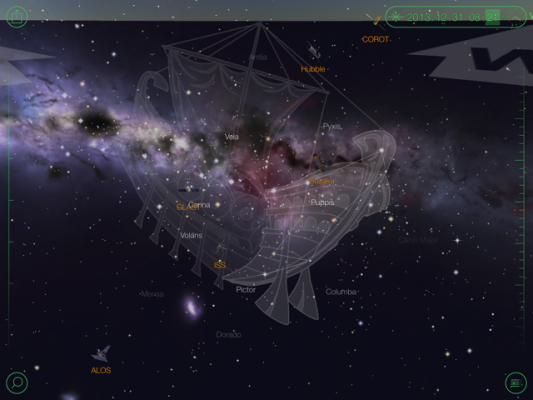 Using this information, Star Walk shows you what the heavens look like from where you stand. You can turn various layers and labeling on and off, depending on how much information you want displayed on the screen; if you want to know everything that's going on - satellites, stars, constellations - leave it all on, and you'll see something like this: 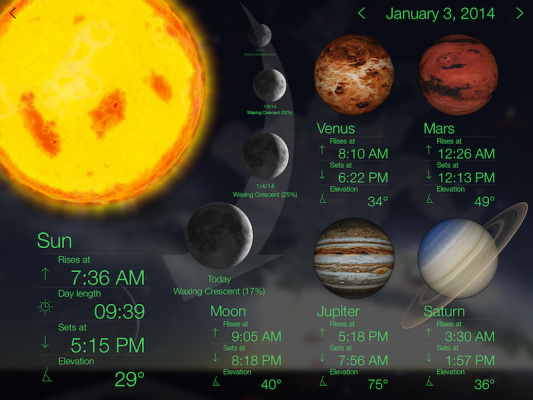 But if all you want is a simple showing of constellations, minus all the man-made stuff, you can shut down those layers, and even change how the constellations are shown (removing the outlines or the lines between stars), and you'll see something like one of these:

You can take the iPad outside while star-gazing, too. Star Walk will use your camera to determine what it's looking at in the sky and show you the labels for what you're looking at. If you want less screen glare, there's a night-viewing option in settings that gives you a screen that looks like this: 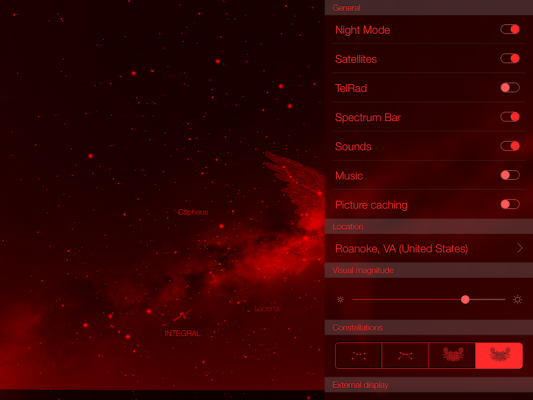 One of the more interesting items is the timeline viewing, which allows you to see what the sky looked like (or will look like) at another time and place. You can search for a place, then move the timeline ahead or back to see what was or will be in the sky.

The dates go back to 7 PM on December 31, 1599. (I discovered this when I tried to see the sky for December 12, 1531.) But you could look back to, say, the days each of your children were born and show them what the sky looked like. For example, here's the sky at the moment my older daughter was being born: 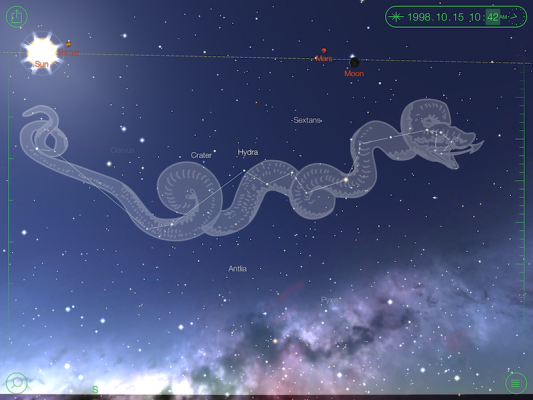 If you want to watch the International Space Station go by in the night sky, you can use the app to see when it'll be above the horizon for you. While you're looking for that, you can also look at photos, read the Wikipedia article, look at galleries of photographs, and more. (Information for the app is courtesy of the European Space Agency, and the "Did You Know?" facts are from KidsAstronomy.com and UniverseToday.com.) There's even a video tutorial built into the app to help you get started. (All the controls and options are a little overwhelming at first.) 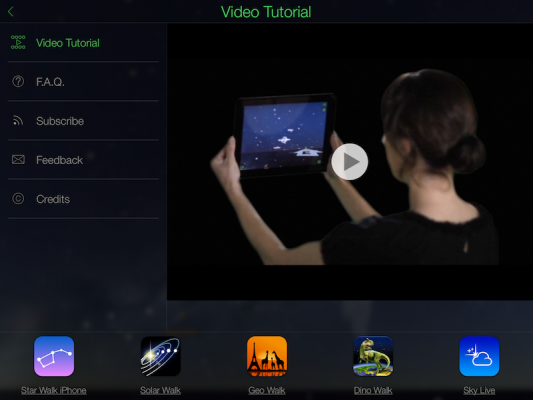 This app is absolutely gorgeous, and it has plenty of information to use for astronomy studies. I love the way it can see the sky through the camera and figure out what you're looking at, as well as from where. One of the first things I realized after downloading this app was that I'd forgotten that there are stars in the daytime sky that we can't see! It's fascinating to look at this app during the day and look at what stars are obscured by the sun's light. 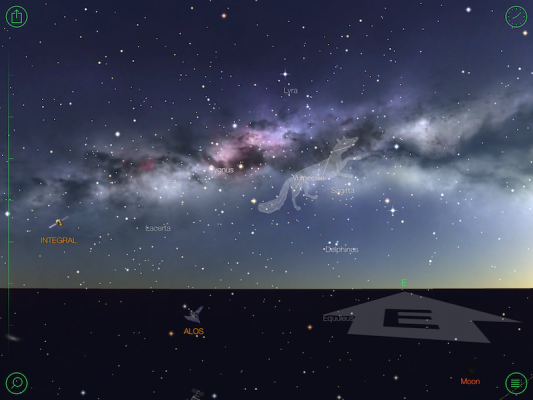 But nighttime is where it's really at. Turning this app on and sitting outside with it to spot stars was an eye-opener. With all the light pollution around us, we don't really see the sky the way it is any more.

When I turned off all the lights in my house and outside of it and stood in our backyard, I realized that we can make out the faintest outlines of the Milky Way where we are. I never even realized it, even after living here for nearly ten years, but it's there. Having this app makes me want to get somewhere really dark so I can see what I've been missing!