Grace Unplugged: A Movie to Challenge Christians to Reevaluate How They Live 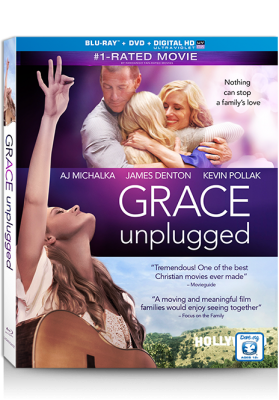 Grace Unplugged is the story of an 18-year-old girl named Grace Trey (AJ Michalka) whose father Johnny Trey (James Denton), was a one-hit-wonder rock star years ago. After a conversion to the faith her father becomes the Music Pastor at their church and includes his daughter in their worship band.

Her talent is amazing, but her father does not really allow her to explore her talents. The audience is left to think that he may be an overprotective dad who doesn’t want a rock-n-roll lifestyle for his daughter or might just not be truly acknowledging the gifts God has given his daughter.

When Johnny’s ex-agent Mossy (Kevin Pollak), comes looking for him, to offer him a new contract, he discovers Grace’s vocal ability. Upon turning down the request to begin touring again with his one-hit-wonder song, Grace rerecords the song and sends a copy to Mossy in hopes of launching her own career.

What ensues is a story of determination, success, family struggle and a seemingly true-to-life depiction of what really happens to a teenager as they begin finding success in the industry. The story has a religious undertone woven throughout, and while it starts off making us wonder if it will be a bit of a cheesy Christian film, the depiction of the Hollywood music scene and the struggles of parenting a teenager, make the film enticing as well as endearing.

The film does a great job of depicting the lure and temptation of stardom brought about by Mossie, the agent and his crew, and the internal struggles that Grace finds herself in, as she battles with her Christian lifestyle being mocked and ignored in the Hollywood setting. It shows how quickly one “yes” and a moment of turning away from God can so quickly take us to a place where a person is almost unrecognizable to those that previously knew them.

There is intriguing storyline of Quentin (Michael Welch), a Christian intern working for the recording studio who was influenced by Grace during her time of playing in her father’s worship band. It shows the immense power that others have in encouraging and calling out the faithful to continue living a Christ-centered life.

The only part that didn’t quite make sense to me was the downplayed role of the mother, Michelle Trey (Shawnee Smith), as her daughter begins to make her own choices. There is a hint at the fact the mother stays connected to the daughter, but it doesn’t show her necessarily reaching out to pull her back. The mother’s support and dedication to her marriage and the and to her husband, do however play out in the progression of the film.

The musical soundtrack is really well done and the singing talents featured are amazing. It’s a wonderful opportunity to be able to sing along with the praise and worship songs featured while watching a good movie!

Grace Unplugged is rated PG. It is distributed by Lionsgate and Roadside Attractions and is now available on DVD.

I encourage anyone who is a looking for an entertaining, uplifting film, which calls us to reevaluate how we are practicing our Christian life to watch Grace Unplugged.

Order Grace Unplugged and support CatholicMom.com with your purchase!

The Ultimate Choice (Pascal's Wager) and Why It Matters
Read
Question of the Week: Faith Formation for Very Young Children
Read
How Christian Women Entrepreneurs Change the World
Read