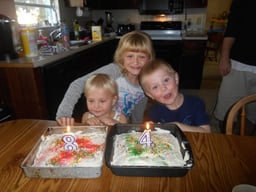 I was thoroughly enjoying a second cup of coffee at a friend's house recently. We were sitting in her living room and we could see our children (three 4-year-olds and a 2-year-old among us) playing on the swing set out the window. My baby was happily playing on the floor. Our big kids were at school. Ahhh...happy kids meant for happy moms on a beautiful sunny September morning.

Until suddenly, without warning, the four little ones who had been outside burst through the door. Luckily, nothing was wrong. Rather, they just wanted to play in the house. They headed down to the playroom in the basement. The moms moved into the kitchen. The mood had shifted, but it was still all good for another few minutes.

And then...CHAOS!!! The kids appeared in a flash and started running around in circles (kitchen, hallway, living room, and back to kitchen) and screaming. The 4-year-olds were in the lead with the 2-year-old loving every minute of being included as the caboose. I picked up the baby so she didn't get trampled.

The kids were still having a blast, but the moms were now very tense. Because we were in the presence of others, we used our "nice" mom voices to re-direct the children. There was a lot of, "Honey, use your indoor voice please," and, "We're not going to run in the house. Please go back outside." It look a couple of warnings (which were becoming sterner as we were ignored) of, "This play date is going to be over NOW," to restore order.

When the kitchen was quiet again, my friend made a comment about sensory overload. She said that she and her husband had seen a television program that explained the negative changes in the brain while experiencing sensory overload. In simple layman terms, "Part of the brain actually shuts down." (Disclaimer: I did not see this show and I have no medical training! I simply thought it sounded like an interesting point that might explain some of my physical reactions when my kids are going nuts!).

After discussing this point, I think we all felt better! So there may actually be a physical reason that all the yelling and running around bothers us so much! We are not just mean, selfish moms who don't want the kids spoiling the peace and quiet!

My other friend added that she never realized how much chaos bothered her until she had kids. Again, I could instantly relate! It was SO refreshing to hear other moms (who I think are great moms) struggle with chaos as well.

Even though I always pray to handle the chaos of my daily life better, I fall SO short. Just yesterday I flipped out at my children when we were decorating birthday cakes (two of my children have the same birthday!). Five children ignored me when I tried to set up a system (one at a time, birthday kids first, etc.). There were sprinkles being dumped in piles, ridiculous quarrels, and children falling off chairs...and I just snapped and sent them all away. I instantly felt guilty. But I knew that my blood pressure would be lower and I could be kinder if I finished decorating myself...so I did (and then I felt more guilt...although I think the cakes turned out slightly more edible!).

I take slight comfort in something that Mother Angelica said on her EWTN show. She said that Jesus will not take away all of our weaknesses even if we ask consistently...because they are a gift. As long as we are weak, we turn to Him again and again for help, and we acknowledge that it is only through Him that we are strong. I do admit, I am constantly asking forgiveness of God and of my children when I lose it during crazy moments. So, I suppose chaos is good for me as it humbly brings me to my knees....and hopefully makes me a better parent slowly but surely.

But enjoying coffee with friends when the kids are playing quietly is still better (and science supports this!). :)