Why You Should Plan for Failure 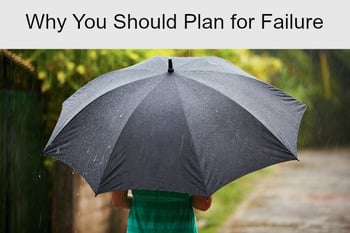 I was at a school conference last week and my son was impressing the teachers with his color-coded, neatly organized binder. (Let me preface by saying the words “neatly organized” are not often used when describing anything related to my wonderful son!) We congratulated him on taking the initiative and responsibility to get off to a great start to the school year. Then one of the teachers said, “So this is only the third day of school. What are you going to do when the binder starts to get messy in a few weeks? What’s your plan then?”

Now…I could have been upset by that question. They were predicting his failure! And my son could have felt deflated. After all, don’t they have faith that he can keep it organized all year long? But that’s not what was going on. This teacher was not trying to discourage him, she was trying to get him to think about his Failure Plan.

Lots of people don’t like the word “failure.” They avoid saying it and pretend it doesn’t exist. Like if you whisper the word “cancer” it somehow makes it less horrible. But failure is a reality. And you can’t avoid it. The best thing you can do is to learn how to react when it comes your way.

That’s why it’s so important to consider the possibility of failure and map out a plan for that scenario. When we create a Failure Plan, we give ourselves a security blanket. We recognize that failure is a possibility but we have the power to turn it around.

I think lack of a Failure Plan is the reason so many people give up on diets and exercise programs. They don’t know what to do when they fall off the wagon. They don't know how to course correct. Because nobody ever talks about it. Nobody wants to admit that it’s possible you might eat a bag or Doritos and a sleeve of Oreos one night and feel so horrible about yourself that you can’t walk into the gym for a month. But if you have a plan…if you know what you will do…it’s easier to get back on track quickly.

Planning for failure might include saving six months of expenses. (When I put it that way, it sounds more like common sense than a Failure Plan, right?)

Your Failure Plan might also list the habits and strategies that you know are effective – as a reminder not to stray too far from the things that bring success. It might include your personal mission so that you continually realign your activities with your priorities.

A Failure Plan also outlines what you will do and where you will turn for help if things don’t go the way you intend. So, God plays an important role in my Failure Plan. And I’m willing to bet God shows up even more clearly in your life when things seem to be falling apart. I don’t think that’s a coincidence. I think it’s all part of the Plan.

If you pay attention to certain “gurus,” you might be nervous about planning for failure. You might worry that giving it any attention at all will become a self-fulfilling prophecy. Well, I’m not here to argue with them. But I do know that plans fail. And people fail. But the ones who eventually succeed are able to do so because they learn from their mistakes…they recognize the signs of failure…and they know what to do when it happens.

What’s in your Failure Plan? Share one thing you do to plan for failure in your life or business.