"Do You Believe?" Will Have You Asking Big Questions

New out in theaters this weekend, Do You Believe? is the latest film from the creators of God Is Not Dead.  The movie brings together a strong ensemble cast and invites the viewer into a compelling storyline filled with action and relationships. Here's a brief synopsis:

With compelling performances and a gripping plot, "Do You Believe?" rivals the best movies I've seen in theaters lately. But the message behind this film catapults it ahead of other entertainment options. It's not the type of movie you watch once and walk away from unchanged. Rather, Do You Believe is great entertainment with a challenge: to believe more unconditionally, and then to let that same belief be the fuel that fires your heart to go out and make our world a better, more loving place. I can't wait to share this movie with our readers and to see it again with my family and friends!

Recently, I had the opportunity to view a screening of the film and interview several of the cast members. Sadly, my dream of meeting Lee Majors (aka "The Six Million Dollar Man") did not come true that day. His stellar performance only increased my love for one of my favorite actors. But each of the cast members I DID interview had terrific things to say about how this film impacted them personally and professionally. Today, I thought I'd share a few of my favorite quotes from those conversations. 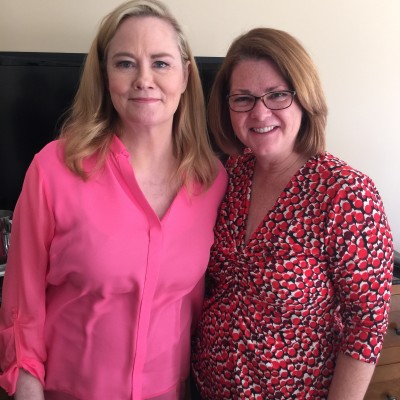 Cybill Shepherd of "Do You Believe" with Lisa Hendey

Cybill plays Teri, one of the most heartbreaking characters at the film's onset and a true portrait of redemption and healing by the time the final credits roll. When I introduced myself as a Catholic blogger, Cybill expressed a great fondness for Pope Francis. Confirmed in the Episcopal church as a young teen, she received a prayer book as a gift which she still keeps by her bed. She is clearly a spiritual woman.

When I asked Cybill about her character's role in the film as a heartbroken mother of a child who died far too early, she related the story of her own mother, who experienced the death of Cybill's sister. She shared, "When a parent outlives a child, it's got to be the worst wound of any." On acting in a religious film, she invited us to reflect upon the great faith-oriented films in Hollywood history. "I was very moved by this film," Shepherd shared, "And... I had started talking to Jesus again, saying 'Help me be more healthy, help me live in a way that I'm feeling better about myself...and then I got offered the part...'" Of the film's takeaway, Cybill shared that the movie will encourage viewers to help one another, to go the extra mile, and to feel a hope in the "do unto others" message of this movie. 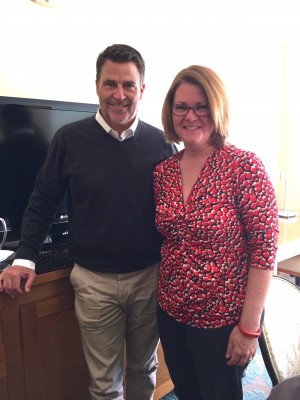 Ted McGinley of "Do You Believe?" with Lisa Hendey

Perhaps best known for recurring television roles, Ted McGinley has a very important part in Do You Believe as Matthew, the pastor whose personal faith pondering is at the center of what happens in the movie. In our interview, he recalled previous roles related to faith and mentioned his own personal faith journey. He called his character, "very special," sharing that "He's a great guy. He's a very solid, decent human being... a good husband who loves his wife. They are unable to have kids, and that's the bump in their road." In reflecting upon his role as a pastor, McGinley mentioned the common issue that sometimes confronts those who serve in pastoral roles: that their care for their flock at times creates a great deal of stress for the pastor's own family. Without giving too much away, I want to share that Ted's role in this film is not only one that will draw you into a deeper consideration of your faith, but it is also a profoundly pro-life character portrayal that will invite you to ask yourself how your actions underscore your commitment to the dignity and worth of every human life. I can't say enough about how fantastic a job he did in this movie. It was a great honor to meet this man after having been so moved by his role in Do You Believe?

Alexa Penavega and Valerie Dominguez of "Do You Believe?" with Lisa Hendey

One of my favorite aspects of Do You Believe? is the way in which the various members of the ensemble cast have stories which interweave with one another. In the beginning of the movie, you have no idea that by the film's wrap they will all be tightly united by the simple question, "Do You Believe?" Our final interview of the day was a joint conversation with two of the cast's most beautiful members (inside and out!) Valerie Dominguez (Elena) and Alexa Penavega (Lacy). I can't say enough about how the class and heart of these two young actresses fuels their portrayals of two characters who are examining the role of faith in their own lives. In a world where we witness so many young women who face challenges about how to live out their feminine genius, I'm delighted to say that these two actors are "walking the talk". I look forward to watching their careers blossom. For young adults who will see this film. I'm certain that the journeys of these two characters in the movie will not only ring true with their challenges, but will also offer great hope and encouragement.

Do You Believe? opens in theaters tomorrow, March 20. I want to encourage our viewers to not only see the film, but to view it as a vehicle to have great conversations with your teens about faith-related challenges in your own family. If we want movies like this for our families, movies that are not only faith-based but also well produced and acted, we need to go out and support them.

In my endorsement for the film, I shared:

With compelling performances and a gripping plot, "Do You Believe?" rivals the best movies I've seen in theaters lately. But the message behind this film catapults it ahead of other entertainment options. It's not the type of movie you watch once and walk away from unchanged. Rather, Do You Believe is great entertainment with a challenge: to believe more unconditionally, and then to let that same belief be the fuel that fires your heart to go out and make our world a better, more loving place. I can't wait to share this movie with our readers and to see it again with my family and friends!

Go see this movie for yourself this weekend. I'm sure you'll join me in asking yourself, "Do you believe?" I hope you'll be able to see the connection between the answer to that question and your own life and actions.

Learn more about Do You Believe?: