, via Wikimedia Commons.
We all have names we can't use for one reason or another. Perhaps Robert is off the table because your former Uncle Bob left your aunt for another woman; or the violent gang in your town has a weirdly high percentage of guys named Dominick; or the name you’ve loved since you were a little girl is, unfortunately, Isis.

Names can be unusable for personal reasons, societal/cultural reasons, and faith reasons, but most of the time, the reasons are temporary (even if “temporary” means “a long time”), and I have a running list of names that I’d love to see reclaimed. Here are ten of them that are at various stages of being reintegrated into our baby-naming conversations, chosen specifically because they’re amazing Catholicky Catholic names.

[Tweet "These 10 #catholic names are rarely used. @sanctanomina wishes that would change."] 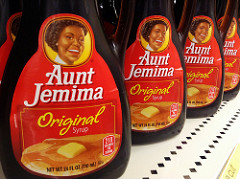 (1) Jemima
Oh Jemima! Name lovers all across America wail and gnash their teeth at the unusability of Jemima here in our country. All it takes is one amazing, famous Jemima to turn the tide, but until then its gorgeous sound, beautiful meaning of “dove,” and biblical and literary pedigree are overshadowed by the fact that not only is “Aunt Jemima the trademarked face of convenience breakfast foods, her name is sometimes used as a female equivalent of [the negative racial epithet] Uncle Tom.” (source)

(2) Lolita
Lolita is a diminutive of a diminutive—it means “little Lola,” and Lola originated as a diminutive of Dolores, which itself is from the Spanish Marian title Nuestra Señora de los Dolores (Our Lady of Sorrows). Great connections, right? Except for the controversial 1950s novel Lolita, by Vladimir Nabokov, in which the protagonist has an affair with his twelve-year-old stepdaughter Lolita.

(3) Madonna
There’s no need to explain why this name feels unusable to most Catholics. And yet, the raised-Catholic singer was named for her mother and Our Mother, to whom the name Madonna has always referred. I think the best way to reintroduce this name into our baby naming is as a middle name, and I’ve seen it considered as such by recent expectant parents. The initial M is common enough for girls that I think it’s easy to hide behind—Katherine M. could be (and likely would be) assumed to be Katherine Mary, Marie, Margaret, or other common M name, so Madonna could hide out incognito while still being present.

(4) Rosemary
Rosemary is the least unusable of this group—indeed, I don’t think it’s unusable at all! But I’ve seen parents say they simply can’t get past the association with the 1968 horror movie Rosemary’s Baby, in which the baby’s father turns out to be the devil. (Why on earth anyone would want to write such a story is beyond me.)

(5) Ursula
Ursula has never been a popular name—it peaked at No. 447 in 1901 and went in and out of the top 1000 until 1984, when it dropped off the charts completely. Normally, this would attract parents who love unusual names, especially since it’s also a saint’s name, and the name of the beautiful Ursuline Sisters. But Disney named the octopus sea witch in its 1989 animated movie The Little Mermaid Ursula, making it the name’s most prominent association for today's American parents.

, via Wikimedia Commons.
(1) Benedict
I love our Pope Emeritus Benedict, and I love his name. It’s gotten a good amount of love in recent years, and British actor Benedict Cumberbatch hasn’t hurt. And yet, the Benedict Arnold association remains fairly strong, and some parents find it difficult to move past.

(2) Casper
Casper the Friendly Ghost has done a number on this name, and I’m a bit baffled as to why—perhaps because it’s a bit macabre that he’s a ghost, and a young one at that? He’s otherwise cute and friendly, though I do know of fair-haired and -skinned children being called Casper by mean-spirited peers. It’s a great name, though, with a great sound and good international use, and St. Casper is one name by which one of the Three Wise Men is known and revered (also Kasper, Caspar, Kaspar, Gaspar, and Jasper—all variants of the same name).

(3) Damian, Damien
Despite Damian’s and Damien’s impeccable saintly connections (St. Damian, brother of St. Cosmas; St. Damien of Molokai; and more than a dozen other holy men), I’ve heard many many times that the name is unusable because of the horror movie The Omen, in which the boy character Damien is revealed to be the Antichrist. (Again, why??)

(4) Felix
I’m seeing Felix more and more in name consultations I do for expectant parents, either on their lists of names in consideration, or already having been bestowed upon their sons, which delights me, because not using it because of the silent-film-era cartoon Felix the Cat is even more baffling to me than not using Casper because of the friendly ghost (though I do hear this reasoning given on occasion).

(5) Romeo
I actually don’t see Romeo ever making a comeback while I’m around to see it, despite it being the name of David and Victoria Beckham's son, as its Romeo and Juliet connotation is too strong and singular. Otherwise, it’s said to be the Italian form of Romaeus, meaning “a pilgrim to Rome,” which is an amazing, faith-filled, Catholic meaning. (source)

It seems that the more singular a name’s association (if that association is a negative one), the more "tainted" it seems to parents choosing names for their babies. Michael Vick and Michael Jackson haven’t “ruined” Michael, for example, nor have Queen Elizabeth I and Elizabeth Taylor ruined Elizabeth, as Michael and Elizabeth have vast, varied, and centuries-deep associations beyond dog fighting, child sexual abuse allegations, bloody persecution of Catholics, and affairs and serial divorce and remarriage. The only way to dilute a strong association is by having more people with that name -- and who better to add to the population with great saints' names than Catholics? I'd love to hear from any of you who have contributed to this cause!

What do you think of the names on the list above? Do you think they’re unusable and why or why not? What names do you have on your own list of names that you don’t feel comfortable using?