Family Games: Games That Fit in Your Pocket

Not everyone has time or table space to play a large, sprawled-out game. Sometimes you just need a small game that can fit in your pocket, not take up a lot of space, and play in a short amount of time. Today, I'd like to tell you about three such games.

[Tweet "3 quick games that fit in your pocket! #FamilyGameNight review by @stuartsstudy"] 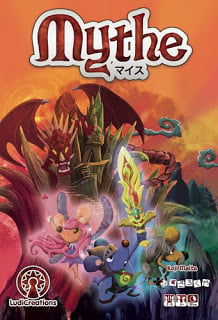 Any child of the 1980s and 1990s remembers The Legend of Zelda and going on an epic quest that is 8-bit in nature. It was the first video game I remember beating, and I did it on both difficulty levels. Well, imagine going on a tinier quest, but no less epic. Instead of being the hero Link, you are a little mouse. Instead of trying to save the Triforce, you are trying to save the Sacred Cheese! I present to you the board game Mythe. Mythe is a game for 2-5 players, ages 6+. It takes about 20 minutes to play and retails for $30.

This game is a masterpiece of production value in a little box. For starters, there are mice meeples and a dragon meeple. This is a nice touch over cubes or generic pawns. The Sacred Cheese is made of metal and has a nice weight to it. The board is a pop-up, which is crazy in a good way! And let's not ignore the gorgeous art on the cards, which are of a size much more substantial than playing cards. It's hard to believe that this game was designed for children ages 6 and up. With all that said, I do fear for the pop-up board and wonder how long it will last, as I have a son, who isn't that gentle at times, and with a $30 price tag, it would be a bit expensive to simply replace the game if the board was destroyed.

The game play itself is simple, but not overly simple. You press your luck in deciding how many cards to draw each round and knowing when to stop. You also strategically re-distribute the cards, so you can steer your opponent into only being able to draw certain cards from you and hopefully stacking the odds in your favor. The game has a two-player variant, but I did not find it enjoyable, as I think the game shines with at least three players and preferably four. Overall, this was a fun game for both the family and light gamers. I can't say I would pay $30 for it, but if you can pick it up for under $20, it's worth it for components, artwork, and all-around fun. 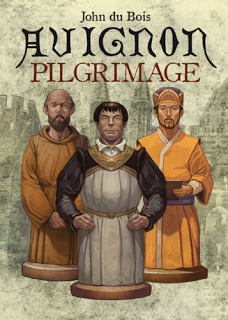 If you know anything about me, you know my three biggest interests are religion (primarily Catholicism and Orthodoxy), reading, and playing games. When two or more of those areas intersect, it makes for a very fun experience for me. Last year, Button Shy Games released a two-player wallet game called Avignon: A Clash of Popes. Side Note: Button Shy Games specializes in wallet games. Wallet games are composed of about 20 cards and fit in a little plastic wallet for ultimate portability. This year Button Shy Games is kickstarting a standalone expansion to Avignon: A Clash of Popes called Avignon: Pilgrimage. It plays two players and takes about 20 minutes to play. The game can be yours for a pledge of $12, or you can get the original, the expansion, and several different promos for a total of $30 ($12 + $12 + $4 + $2).

The setup and game play is the same for both Avignon: A Clash of Popes and Avignon: Pilgrimage. The big difference is the characters. In the original game, you have Bishops, Cardinals. Inquisitors, Knights, Peasants, and Nobles. In the expansion, you have Vicars, Nuncios, Canonists, Courtesans, Ascetics, and Scribes. This not only adds new roles with new artwork, but new petitions which they can perform. This creates a unique game experience from the original, and some of the petitions seem to also add a bit more depth to the game concept.

There are several things I like about this game, with the first thing being that the game is based on actual historical events. The Papal Schism did actually occur, and it lasted approximately 40 years. During this time, there was great contention over who the real pope was. The fact that it lasted this long also meant that the original pope and antipope involved in this schism passed away and new ones were elected. This was definitely a black mark in the history of the Catholic Church.

The next thing I like about this game is the ease of teaching and learning. The mechanics in this game are simple, but there is a subtle strategy in not only knowing what moves to make, but when to make them. Finally, the strongest point for me is the interchangeability. If you own both games, you can mix and match the characters (based on their faction) to create different versions of the game, creating an ever-changing strategy you need to develop to win. If you are a fan of history, Catholic history, and/or portable games, this is one you'll want to check out and back on Kickstarter! 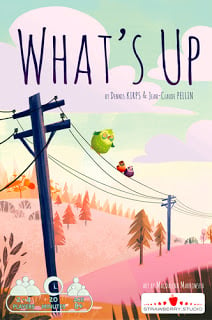 Late last year, I reviewed the quick, fun game 3 Wishes, which was originally published by Strawberry Studio (located in Poland) and picked up for U.S. distribution by Passport Game Studios. Today, I am reviewing the second game from Strawberry Studio's catalog called What's Up! What's Up is a memory and set-collection game for 2-4 players, ages 8+. It takes approximately 10-20 minutes to play.

What's Up is a fast-paced game that is equal parts memory and luck. At about 10-20 minutes of play time, it is a good appetizer to start a serious night of gaming or a good dessert to finish a night of gaming. I especially enjoy playing it with my son as its a game that is simple enough for him to understand it, and it does a good job of teaching color recognition, number sequence, and memorization. What I really like about the game is the artwork. Each bird has their own personality. The green bird looks a little lazy, and the red bird looks a little moody. Yellow is perky, and purple is content. All four games in Strawberry Studio's catalog have art done by Magdalena Markowska, and I look forward to seeing more of her work in other games. At the moment, What's Up is not available for purchase in the U.S., but hopefully Passport Game Studios or another publisher will pick this one up soon.