Reading and playing games are two things that I have a great passion for. When I'm not reading something Catholic or Orthodox, I like to read Classics or mythology (Greek, Roman, Norse, etc.) And when I'm not reading, I like to play games. Therefore, when the two mash up, I'll be one of the first in line to give that game a try. Today, I'd like to tell you about two such games - Odin's Ravens and Holmes: Sherlock and Mycroft.

[Tweet "Two-player #games with a literary twist, reviewed by @StuartsStudy"]

In Norse mythology, Odin has two pet ravens named Huginn and Muinn. Their task to travel through Midgard (Earth) and bring Odin back news on what life is like in other places. Having been assigned to this task for millennia, they have grown competitive with each other. Therefore, they've decided to make a race of it. Travelling in opposite directions, they want to be the first one to return to Odin and report their news. But what would Norse mythology be without a little "help" from Loki? This is Odin's Ravens! Odin's Ravens plays two players, ages 8+. It takes approximately 20 minutes to play and retails for $25.

Odin's Ravens is a simple two-player racing game that boils down to hand management. How many cards will you play this turn? How will you balance your hand with Flight and Loki Cards? Do I go for speed or do I play more Loki Cards? Should I use the Loki Cards to benefit me or hinder my opponent? The game is very easy to teach and plays so quickly that you will want to play it again immediately, win or lose. What I like best about this game is the presentation and art. The game box opens up like a book, which is a nice touch. The Raven tokens are made of laser-cut wood, but the best part is the art on the cards. They are simple scenes/backgrounds, but they are beautiful and inspired by Norse mythology. This is a worthy title to add to your two-player game collection. 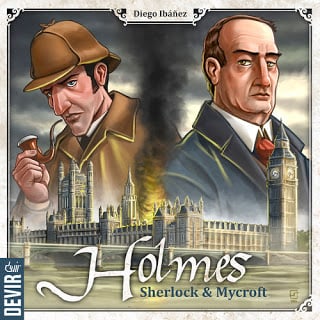 The year is 1895 and a bomb has exploded in the House of Parliament. The man apprehended and charged with the crime was a young man named Michael Chapman. Mycroft Holmes has been tasked with proving the young man's guilt, and Sherlock Holmes has been hired by the young man's parents to prove his innocence. This is the game Holmes: Sherlock and Mycroft, a 2- player game for ages 10+. It takes about 30 minutes to play and retails for $25.

Holmes: Sherlock and Mycroft is a game that mixes worker placement, set collection, and resource management. What makes this game different from other worker placement games is that not all the spaces are available in the first round. More unlock as time goes by, and depending on the order in which they unlock, it can create a completely different game-play experience. The set collection scoring mechanism is nice too. Instead of whoever has the majority of a certain set getting all the points, the majority person only gets a difference in points. Since the random nature of the cards being dealt out, this can prevent someone from running away with the game due to mere luck of the draw.

Another positive for the game is the different ways you can tweak the game. By adding one or two villain cards, you can introduce negative elements into the game that require advance planning or else you'll be seriously hurt in terms of your set collection. You can also introduce a double-sided Holmes card that will increase the tactical nature of the game, allowing you to reserve a single card to buy it later and also keep it from your opponent.

The art in the game is solid both with the Character Cards and the Clue Cards. This is helpful, because it serves as a distraction that you are not just collecting 3s and 4s, but you are collecting clues like a fingerprint, cigarette butt, or a button. Unfortunately, even with the great art, the theme still feels a little pasted on, like you could have used any theme for this game and it would have resulted in the same game play. With Sherlock Holmes now in the public domain, I imagine we will see more than a few games dedicated to the great literary detective. I just hope that the mechanics and game play are as solid as this one.