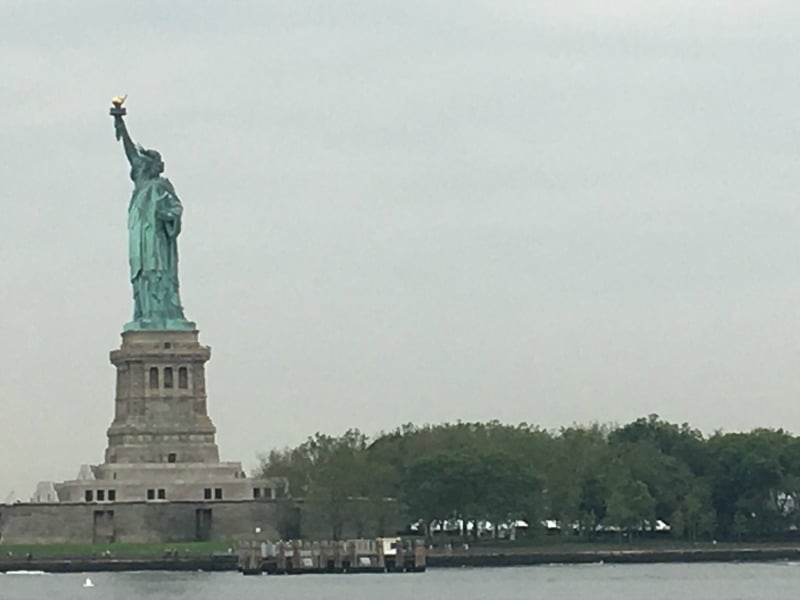 I'd never been to New York before, until this summer. My husband had to go for work and so I tagged along. I figured we'd check out Broadway, Times Square, the 9/11 Memorial, maybe grab some pizza, but what I never imagined would be one of the most moving parts of the trip was seeing the Statue of Liberty. Growing up, I've seen the statue a million times. I've read about the statue as a symbol of freedom for the immigrants coming into New York but I never really felt a connection to it.

I had admittedly told people I was more excited about trying New York style pizza and on my "things to do in NYC," the Statue of Liberty was on the "if I get around to it," part of the list. I did, however, have a desire to go to Ellis Island, as I had learned through family history that my great-grandfather had arrived on the island in 1909, traveling from Gurun, Armenia. I hoped to learn more about him at the Family Heritage Museum offices.

We arrived in New York on Sunday and on Monday were gifted tickets to a dinner cruise around the NY harbor. Once we boarded the ship I got excited to see her. I made sure to keep an eye out awaiting the first glimpse of her and had my phone in hand to capture her image. We finally turned a corner and there she was, the Statue of Liberty, this symbol of freedom I had always heard about. It was in that moment that I became awestruck. It hit me instantly, although never until that moment, that 113 years ago, my great-grandfather, at the age of 18, traveled to America to start a new life. His knowledge of the country wasn't from internet searches, or YouTube videos, magazines or even phone calls or FaceTime. He was leaving his beloved homeland because of the Armenian Genocide and to start a new life for himself.

[tweet "A glimpse of what an immigrant ancestor experienced as he approached his new land."]

According the ship manifests I found, he arrived here in with only $10! He arrived after traveling about a month's time and from his ships's view, could see this same statue as they pulled into the harbor. I was experiencing a glimpse of what he felt as he approached this new land. I imagined the feelings of the passengers as they saw her. The relief they must feel when they finally saw her after their journey on the ship. The sickness, starvation, and possibly death that they had experienced, because of the hopes for a better life. I imagined the anxiety they felt as they wondered if this new glory land would offer them the same lives they'd heard about in stories. Did they make the right choice by giving up everything to claim their future here?

Here I was 113 years later, the 4th generation since this man I'd never met arrived at the island for the first time. Here I was on vacation. The traveling to New York had been easy, a 5-hour flight across the country, 2 movies and a couple snacks later and we took an Uber to our hotel. My journey was so different than his. I will be forever indebted for the sacrifices he made for me all those years ago. Generations including myself, my children, my grandchildren and great-grandchildren, will benefit from his life-changing journey. A journey in search of freedom. A journey in search of a better life. While it may or may not have afforded him those changes, this land will forever afford generations to come, those freedoms because of him and his courage.