The bazaar district of Istanbul is filled with a controlled chaos as merchants and their assistants scurry from one location to the next. Each one is trying to gather and deliver their goods the quickest, so that they can gather rubies faster than their opponents. Will you be the most efficient in your strategy or will rival merchants beat you to the punch? Find out in Istanbul! 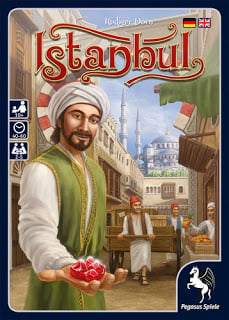 1. Lay out the 16 Place Tiles in a 4 x 4 grid. There are several suggested layouts in the back of the rule book. For your first game, try the "Short Paths" grid which uses the blue numbers on the tile.

2. Sort the Mosque Tiles by color and then by number of goods in four stacks. Place them on the two Mosques (Tiles 14 and 15).

3. Place three Wheelbarrow Extensions per player on the Wainwright.

4. Add 1 Ruby per player on each Mosque and the Wainwright. Also add Rubies to the Gemstone Dealer and Sultan's Palace, continuing until you reach the appropriate space per number of players.

5. Place the Mail Indicators in the top row of the Post Office.

6.  Shuffle the five dark Demand Tiles, and place them face up on the Large Market. Do the same with the light Demand Tiles, placing these on the Small Market.

7. Roll both dice to determine the starting place for the Governor. Repeat this for the Smuggler.

8. Shuffle the Bonus Cards and place them face-down in a stack. Also, place the coins and dice near the game board.

9. Have each player choose a color. Give them a Merchant Disc and four Assistant Discs of that color. Also give them a Wheelbarrow and four Goods Cubes, placing them on the first space of each good of their Wheelbarrow. Lastly, place a Family Member disc at the Police Station.

10. Give the starting player two coins, and give each subsequent player one additional coin. Also, give each player a Bonus Card.

1. Movement - Move your Merchant stack with Assistants under him 1 or 2 Place Tiles. You then either pick up an Assistant or leave an Assistant behind. If you don't want to do either, then your turn ends.

2. Encounter with other Merchants (if any) - If there are other Merchants where you land, you must pay them each two coins. (If you can't or won't, your turn ends immediately.)

3. Action - You may carry out the action that the Place Tile provides. If you can't or don't want to, proceed to Encounters.

4. Encounters (if any) in any order with - a. Other Family Members - send them to the Police Station and gain three coins or one Bonus Card for each Family Member. b. the Governor - Draw one Bonus Card from the face-down stack. Pay two coins to keep it or discard another Bonus Card from your hand. c. the Smuggler - Gain one good of your choice, by paying two coins or another good. (Note: After encountering the Governor or Smuggler, roll both dice and move them to the Place Tile according to the value of dice.)

5. Bonus Cards - On your turn, you may play any number of Bonus Cards, which will allow you to alter the rules one time on your turn. (Example: Take five coins from the general supply.)

The end of the game is trigger when one player collects five Rubies. Complete the current round. After this occurs, each player may play any leftover Bonus Cards that provide goods or money.

[tweet "Review of Istanbul, a board game with many levels of challenge #familygamenight -@StuartsStudy"]

In 2014, Istanbul won the game of the year award in the connoisseur category. That means that they viewed the game as more difficult and strategy-driven than a regular family game. The game was wholly deserving of the win, but I would argue that it is out of the family game realm. Yes, there is a bit of a learning curve in explaining to people how to move their Merchant with the dropping an assistant off, but after a few rounds of play, it clicks. After that mechanism, the biggest thing is figuring out which routes/circuits are going to be the most efficient at getting you gems the quickest, because this game is a race. It is a true "pick up and deliver" game, where you must get various goods and exchange them for rubies. You will do this by travelling the smartest routes, cutting your opponent off from their routes, utilizing your family member, and playing bonus cards at the ideal time. I would argue that this is a gateway game, but I think someone who has played before would have an advantage over someone who doesn't.

What I like best about this game is the modular game board. This allows the game to scale in difficulty. When you are learning the game, you arrange the tiles in a beginner's setup so that you can learn the flow of the game. After everyone has gotten used to it, then there's a slightly more advanced setup that makes routes longer and more challenging. When you really want to ramp up the difficulty, you completely arrange them at random. That's when your brain really starts to burn a little as you're trying to find your best options before others can. Do I complete my wagon first? Do I focus on the Sultan's Palace before others? What do I do?!

On its own, this is a great game and deserving of all the praise it receives. However, the designer decided to release two expansions to it to give you a little more to think about. The two expansions are called Mocha and Baksheesh and Letters and Seals. I have only played the first, so I'd like to tell you a little bit about it.

Mocha and Baksheesh introduces coffee and bribes to the game! These provide you new ways of getting rubies, which you will need, because you now need six rubies to win the game! In addition to these two elements of the game play, the modular board has grown larger. Instead of a 4 x 4, you are now making a 5 x 4 grid. Having these extra spaces gives you more routes to pursue and more options of winning. One of the "bad" things about the original game was if someone found the best route before you did, you would always be one step behind them. This expands both the game board and your options when gathering rubies.

What I see as the biggest addition to this game is the guild cards. (I like to think of them as bonus cards on steroids.) These cards are so powerful that playing one takes your entire turn, but the benefits you get from them is huge. Pay one blue, one red, and one green to receive 20 coins. Take one free wheelbarrow extension. Do the tea house action and get double the income. It also introduces a strategy of sitting still. If you see an opponent is coming to your spot on their next turn, you can play a guild card and make them come to your spot and pay you to take their next action. This expansion really raises the bar on the game and adds more strategy and depth to an already great game!